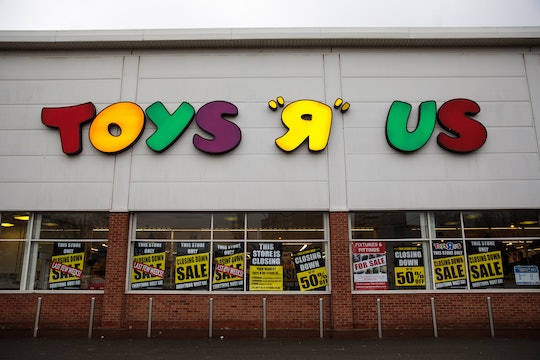 If You're A Toys "R" Us Credit Card Holder, Here's How The Closings Will Impact You

Kids of all ages are mourning the loss of Toys "R" Us, a giant chain of toy stores that recently announced its plan to close or sell all of its locations in the United States. But adults have some financial questions about the store's closing, especially when credit scores may be affected. For instance, what happens if I have a Toys "R" Us credit card with the store? Toy shoppers everywhere are scrambling to figure out how to deal with their "R" Us credit cards when Geoffrey the Giraffe says goodbye forever.

Because the Toys "R" Us official press release about the store's closing did not directly address the store credit card situation, I called the Toys "R" Us information hotline to learn more. "We don't have information regarding this matter," was all a store representative could say at this time, and the rep was understandably hesitant to comment further. The company will in all likelihood announce more specific information about the closing's effect on "R" Us credit card holders in the near future. For now, however, card holders will have to wait and see.

In general, though, what happens to store credit card holders when a company goes out of business? Hate to bear bad news, but you will still have to make payments on any debt. "Almost always, the outstanding credit card balance is still outstanding, and the cardholders will still get bills," said Babs Ryan, a global consumer trends analyst and the former director of card services for General Electric in Credit Cards.com. "As a cardholder, you acquired the goods on the credit cards, and made an obligation to pay over time with interest, and you still have that obligation." Yep, you'll still have to make good on those Hatchimals you bought over the holidays, as well as any toys your kids have long since forgotten about.

Why does the debt remain even if the store disappears completely? Although store-branded credit cards may only work at the store's specific location, the credit cards themselves — and your debt — are underwritten and owned by a bank, as explained by Robin Saks Frankel of Bankrate.com. Toy stores may come and go, but debt is forever. In other words, you can't just grab an "R" Us credit card card and buy all the toys in the store for free right now. Guess growing up really is the worst, right?

For most customers, store credit cards are enticing because of those loyalty programs. For instance, the "R" Us credit card users earned special points for buying items from the store on the card, according to the Toys "R" Us website. At this time, it looks like current "R" Us card holders will continue to receive the same benefits, according to the Toys "R" Us store closures site. Given the store's uncertain future, no one would blame you for cashing out on all your rewards dollars sooner rather than later. I would imagine the bottom is about to fall out of that rewards dollars market. Cash that stuff in for some Shopkins while you still can.

So does all this mean the brand is about to disappear entirely? Not necessarily. Fortunately for fans of the store, Toys "R" Us is looking for a buyer for its website, and the store's brick-and-mortar locations in central Europe and Japan will continue to operate for the time being, according to The Washington Post. Because it is a widely recognized brand that has an intense nostalgia factor for generations of kids, so Toys "R" Us will likely continue to exist in some form. Sadly, though, your dream of tearing through the store on a five-minute shopping spree is probably never going to happen.