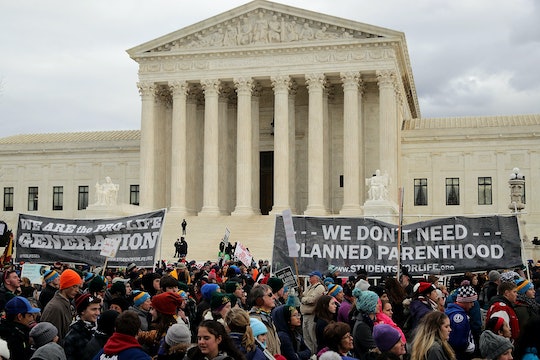 Can A SCOTUS Seat Stay Vacant?

The Supreme Court seat left empty after the death of Associate Justice Antonin Scalia last year may soon be filled. Trump has to name his choice for the seat — but the past Supreme Court nominations have shown us that doesn't automatically mean his pick will be approved. So what happens if no one is appointed to the Supreme Court?

On Monday, President Donald Trump took to Twitter to say he will announce his Supreme Court pick on Tuesday. The process of appointing a Supreme Court justice is several steps. After the president announces his nomination, the nominee is interviewed by a Senate Judiciary Committee, which is made up of 18 Senators. The Committee will vote, but even if they do not approve of the nominee, the nominee is typically still given the chance for the full Senate to vote for or against them, The Washington Post reported.

The number of votes needed for Trump's appointment to be approved depends on what happens next. If there's a filibuster — meaning, if a Senate member delays or obstructs the vote by debating about the candidate — Trump's pick would have to win a supermajority of the vote, or 60 votes. If there is no filibuster, his candidate will only need a 51-majority vote.

But that likely won't happen. Democratic Sen. Jeff Merkley told Politico that he and other Democrats plan to filibuster Trump's pick. Democratic senators are taking a page out of GOP senators' book, because they refused to hold hearings for President Barack Obama's nominee, Merrick Garland, for nine months, until his nomination expired. “This is a stolen seat," Merkley said to Politico. "This is the first time a Senate majority has stolen a seat. We will use every lever in our power to stop this.”

Things could get even uglier, because Republicans could use a nuclear option that would allow them to appoint the nominee with a 51-majority vote. However, Republican Mitch McConnell suggested that the Senate will refrain from using that route. "It takes 67 votes to change the rules in the Senate. We saw one rather conspicuous exception to that a few years ago but no we don't have any current plans on the rules," he told The Hill.

If Trump's pick is rejected, he'll have to pick another candidate and start the process all over again, according to TIME. Vice-president Mike Pence suggested that Trump's pick will have the same values as Scalia:

Politico reported that Trump's pick is most likely Judge Thomas Hardiman or Judge Neil Gorsuch, while the Associated Press seconded those and also suggested Judge William Pryor as a likely candidate.

Trump's pick is crucial because this could affect which way bills related to contraceptives, the environment, and transgender rights will go.

But no matter who it is, Democrats are going to fight to keep him (and we can be pretty certain it will be a man) out of the Supreme Court.