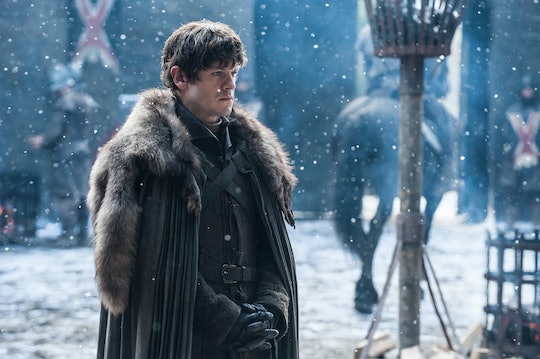 What Happens If Ramsay Doesn’t Have An Heir On 'Game Of Thrones'? It Will Be Horrifying

Game of Thrones Season 6 returned with an ominous conversation between Ramsay Bolton and his father, Roose. Roose points out that Sansa bolted (sorry, sorry, sorry), and with her, has gone Ramsay's shot at bearing a son. So what happens if Ramsay doesn't have an heir? Whatever it is, Ramsay seems really terrified of the consequences.

"I rebelled against the crown to arrange your marriage to Sansa Stark," Roose threateningly reminds his son. "A reckoning will come. We need The North to face it. The entire North. They won't back us without Sansa Stark. We no longer have Sansa Stark."

Most of Ramsay's motivation in the series thus far has been driven by the desire to be legitimized as Roose's heir. Roose has no other children, but Ramsay is a bastard. His torture and brainwashing of Theon Greyjoy was all in an attempt to please his father, so that he may be legitimized by the crown and seen as Roose's rightful heir. But, as we see, Roose mostly thinks Ramsay's schemes are foolish. (Plus, kinda barbaric.) Finally, though, after Ramsay successfully secures a vital base in The North, he earns his father's approval and gets handed legitimization documents. He is now the rightful Bolton heir.

Once he's formally recognized, Ramsay has everything he's ever wanted, especially the long sought-after recognition of his father. Helping Roose further his quest for the throne by producing an heir with Sansa is vital to keeping this up for Ramsay. With Sansa gone, and his chance at conceiving with her foiled, Roose, once again, has no purpose for Ramsay. Roose's wife, Walda Frey, is pregnant, and if she gives birth to a son, Ramsay will be out of the picture yet again. Even though Ramsay has been legitimized by the crown, he is still technically a bastard, and Roose's legitimate son with his wife, Lady Walda Frey would be a stronger heir to the throne than Ramsay, whose mother is a miller's wife Roose once raped.

Baby Bolton's purer bloodline, it turns out to be a boy, would surely kick Ramsay out of contention for heir to the Bolton name. So it's vital for him to find Sansa and get her pregnant ASAP.