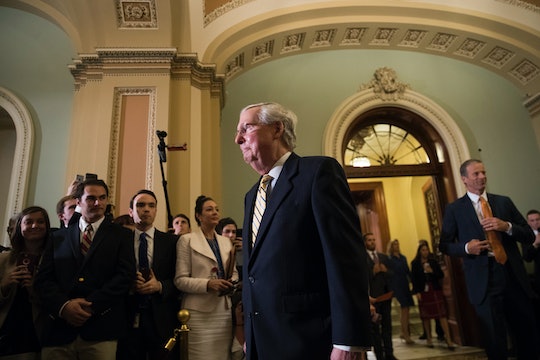 On Friday, South Carolina Sen. Lindsey Graham met with President Donald Trump to discuss another alternative to the Affordable Health Care Act following the GOP's repeated failures to repeal the historic measure, according to The Hill. Graham's repeal proposal would use the ACA's budget to provide states with block grants, and each state would be able to spend the money however it sees fit. Given the events of the past few months, it seems unlikely Republicans will get on board with Graham's alternative, which has many Americans wondering what will happen if Republicans can't repeal the ACA. Unfortunately, this never-ending ACA limbo could put the health care of countless Americans in jeopardy.

It goes without saying health care is a tricky issue that stirs up a lot of debate. One thing many health care experts agree on, however, is that all of this political turmoil is detrimental to American health care. It's important to note that insurers often make decisions based on the political climate, and they react poorly to an unstable market. Considering a lot of insurers don't know if the ACA will repealed, "the number of insurers filing initial applications on the federal marketplace dropped 38 percent for 2018," according to CNN. Although insurers don't have to file applications until late September for 2018, the steep drop in applications is not a good sign. In fact, some insurers have already dropped out of the federal marketplace entirely.

In February, Aetna announced it wouldn't participate in the ACA market, according to Health Exec. If more health insurers like Aetna pull out of the ACA market, Americans will be faced with less options for insurance, and a lack of insurers could cause the ACA to collapse entirely. According to CNN, "25,000 people in 38 counties in Ohio, Indiana and Nevada are at risk of having no options" in the healthcare market next year if the government continues to send mixed messages on the ACA. Unfortunately, a repeal of the ACA would be just as disastrous to health care, which means it's essential that Republicans find ways to improve and strengthen the ACA as it already stands. Repealing the ACA won't work because there's no better replacement at the moment, and it won't fix the current chaos in the ACA market.

In the case that insurers do decide to stay in the ACA market, it's likely they'll raise premiums to counteract low ACA enrollment. Obviously, this scenario is also disastrous for Americans. George Nation III, a contributor at The Hill, explained in an op-ed that even if the ACA is repealed, the uncertainty of the bill's "new rules" would scare off insurers.

Nation III, said, according to The Hill:

If either the new rules or the uncertainty associated with them cause insurers raise prices too high without a corresponding increase in tax subsidies, then individuals either won't be able to afford the insurance offered on the exchange or there will be no insurers left in the exchanges.

It goes without saying that Americans face a great deal of uncertainty and risk if the GOP continues its attempts to repeal the ACA. Although the ACA isn't 100 percent perfect, millions of Americans rely on it to survive. Instead of Republicans squabbling over health care, it's crucial they team up with Democrats to find a better solution than simply repealing the ACA altogether, because a repeal would mean an estimated 32 million more people go uninsured, according to CNN. In fact, "seven in ten (71 percent) Americans would rather see Republicans in Congress work with Democrats to make improvements to the ACA but not repeal the law," according to the Kaiser Family Foundation. This statistic is something Trump should consider each time he calls for the administration to "let Obamacare implode."

So, what can be done for the ACA opposed to a repeal? Although there are a lot of ideas out there, a good start would be to make health care more affordable. To do this, the government could provide insurance companies with larger subsidies to avoid high deductibles or prices. In addition, the government could require insurance companies to provide three sick visits without counting toward deductibles each year, which Hillary Clinton outlined in her plan to lower health care costs during the 2016 presidential campaign. Keeping health care affordable is important in the crusade to save the ACA and Americans' insurance. A repeal wouldn't do anything to lower the costs of health care. In fact, a repeal would make health care more expensive.

As time goes on, it has become increasingly clear that there needs to be bipartisanship in regards to health care. Americans don't deserve to lose their health care due to competing political agendas, and it's unconscionable to let citizens watch their health care collapse. Hopefully Republicans will finally give up the ghost of an ACA repeal, and real improvements to the ACA market will be made.