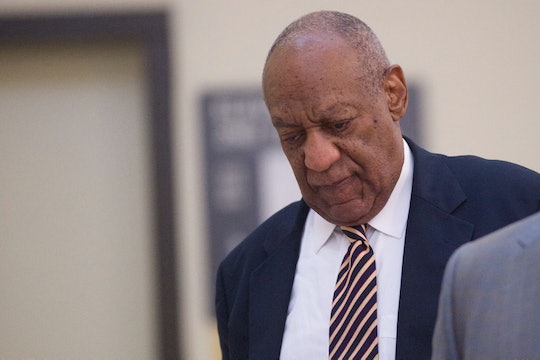 What's Next For The Jury In Bill Cosby's Case?

After a whopping 31 hours of deliberation, the jury deciding Bill Cosby's fate is reportedly deadlocked. A decision could still be reached, but what happens if the jury in Cosby's case can't decide on a verdict? A standing deadlock would lead the case to a mistrial, but there are other actions that could be taken to prevent that from happening.

In the course of their deliberations, the jurors asked six questions, most of which were requests to rehear testimony. Even after these clarifications were made, the jury made a statement claiming that they were unable to come to an agreement. Judge Steven O'Neill reportedly issued the Spencer Charge to the jury, also referred to as the Allen Charge in some states, that requires jurors to re-examine their views and opinions about the case in an effort to reach a consensus:

I am required to read you an instruction. The jury foreman has informed me that you are deadlocked. If you are still deadlocked you should report that to me. If you've reached a unanimous decision on some of the charges, please report that back to me.

Pennsylvania judges have quite a bit of legal flexibility in a deadlock before a case is declared a mistrial. Jim Koval, the director of communications for the Pennsylvania Courts, stated that there is no limit to the number of times a judge can issue the Spencer Charge.

Pennsylvania criminal defense lawyer Ed Paskey, a former prosecutor, told The Washington Post that he has seen judges ask juries to continue deliberations as many as three times:

It’s a very, very rare occasion that a judge is going to let a jury off the hook on the first indication they’re hopelessly deadlocked. If you start to get into three or four full days, then there is going to be some concern after that point that perhaps a jury is not going to be able to reach a verdict.

Judge O'Neill also has the option to remove one or more of the jurors. Jury consultant Art Patterson explained the legality of this possibility to The Washington Post:

If the other jurors say to the judge, one juror will not deliberate, will not discuss facts, reasons, will not participate, judges have actually removed jurors. That’s a very extreme move, but it can be done.

Mistrials due to hung juries aren't all that common. Juries want to reach a verdict and therefore usually end up reaching a consensus. In a sampling of court cases conducted by the National Center for State Courts, out of the included cases that went to trial, only 6 percent ended in hung juries.

If the jury does remain hung, a mistrial would be declared. If this were the case, the charges against Cosby would stand and prosecutors would have four months to decide whether or not they would retry the case. Cosby would likely be released on the same $1 million bond as before. As deliberations continue, the world waits to see Cosby's fate. It is in the hands of the jury now.