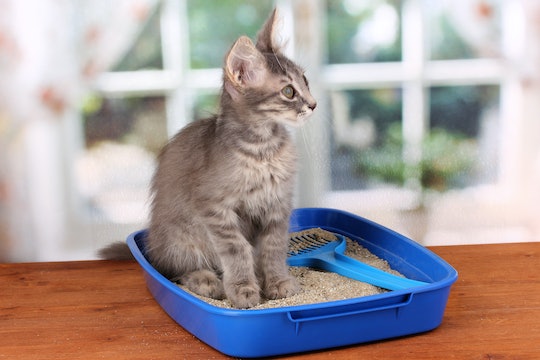 There are some no-nos in pregnancy that even the most straight laced of us will try to find a way around. Can I really not eat sushi? They are, of course, a small price to pay when you consider the end prize. But that doesn't mean you don't mourn their loss a bit — and look forward to enjoying them again once your bundle of joy arrives. There are other things, however, like cleaning the litter box, that you will happily avoid for nine months (and beyond). But what happens if you clean the litter box while pregnant?

"Cats can carry an organism called toxoplasmosis in their poop," Dr. Yvonne Bohn, OB-GYN at Providence Saint John’s Health Center in Santa Monica, California, tells Romper in an email interview. "Toxoplasmosis can cause birth defects in a developing fetus if a mother is exposed to it while pregnant."

According to Baby Center, while you technically can change the cat box while pregnant, it's best to avoid doing so and reassign the task to your partner. After all, as the website pointed out, "you'll never have a better excuse" to do so.

However, if having someone else change the litter box just isn't a possibility, then you'll want to reduce your chances of getting the toxoplasmosis by changing the litter box once a day. "It takes at least 24 hours for the litter to become infectious," Baby Center noted. You will also want to wear gloves while doing so and make sure to wash your hands afterward.

Bohn says that while it is totally safe to have a litter box in the house, it is better not to be close to a litter box when it is being cleaned out in case some of the particles become airborne and you inhale them. "It is reasonable to just leave the room," she says.

It's important to note that cat poop isn't the only way to contract toxoplasmosis. Eating raw or undercooked meat, or fruits and vegetables that haven't been properly washed, peeled, or cooked also poses a risk, according to Baby Center. You will also want to be sure to wear gloves while gardening. According to the Centers for Disease Control and Prevention (CDC), soil or sand used outdoors might be contaminated with cat feces that contain toxoplasma.

In terms of keeping your cat safe, the CDC recommended feeding your feline family members commercial dry or canned food, not raw or undercooked meats. Try to also keep cats indoors and avoid stray cats while you are pregnant.

Symptoms of toxoplasmosis include fatigue, fever, and swollen lymph nodes, according to the American Pregnancy Association (APA). But sometimes there are no symptoms at all. The APA noted toxoplasmosis is most common in areas with warm, moist climates — more than 50 percent of the population in Central and Southern Europe, Africa, South America and Asia are infected with toxoplasmosis — and in the United States one out of 1,000 to 8,000 babies are born with the infection.

If you suspect toxoplasmosis, then your healthcare provider will use a blood test to determine if you have been exposed, according to the APA. If the infection is detected, then you will be treated with antibiotics for several months in order to reduce the risk of premature birth, low birth weight, fever, abnormal head size, brain calcification, and other conditions, the association noted.

When it comes down to it, this is one pregnancy limitation that you won't mind abiding by. And really, it's one that even if you sense there is some wiggle room in the form of wearing gloves, you're going to want to leave unquestioned.

Because you may as well enjoy it while you can, right?