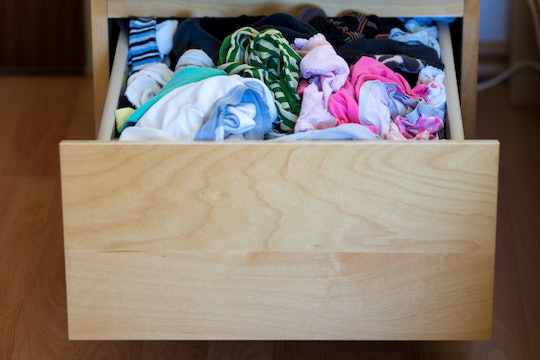 I'm a bit obsessed with panties. When I get the Victoria's Secret coupon in the mail for seven pairs for $30, I'm always super excited. All told, I probably have between 45 and 50 pairs in my drawer at any time, so wearing them for more than a day is super strange to me, but I understand that I'm a bit fanatical. You might not feel the same way. But what happens if you don't change your underwear every day? Is it dangerous? You might be surprised at what's going on down there.

The genital area is a complex environment on your body that is usually warm and moist, making it the perfect breeding ground for bacteria or fungi like candida, the fungus that causes the majority of vaginal yeast infections, noted the Mayo Clinic. However, a yeast infection is probably not what you'll notice first if you don't change your underwear every morning. Likely, what you'll notice straightaway is the smell. Between the sweat, urea, and other bodily fluids, the odor builds up fairly quickly, and can be noticed at a fair distance from your body. This means, you won't be the only person to notice the aroma — everyone around you will, too.

Honestly though, the smell is the least of your concerns. Lauren Eckert Ploch, a New Orleans-based dermatologist, told Tonic that "Bacteria can also overgrow: Many pathogens live on our skin normally, but can rapidly proliferate under the right conditions." Conditions like wearing the same knickers over and over again, building yourself a colony in the lining, and making a home for possible new and interesting pathogens to explore your nether regions, causing infection, odor, or irritation.

The scariest risk Dr. Ploch pointed out is the risk of growing so much bacteria and fungus in your underwear that you could develop a staph infection. This is actually such a big concern — especially within the female population — that the United States military developed a specific type of antimicrobial underwear for female soldiers to wear in the field so that in times of war, the re-wearing of underwear wouldn't pose as great a risk to their health as it could otherwise, according to Defense Technical Information Center. They observed that the buildup of bacteria in the vaginal area was actually preventing female soldiers from doing their jobs as effectively because of the pain and irritation that went along with wearing soiled underwear.

A recent study by the American Society for Applied Microbiology found that it's not just if you change your panties and wash them, but how you do. Researchers wrote, "Every time when wearing a garment or using a textile, micro‐organisms will be transferred from the skin to the fabric," and that insufficient cleansing in cold water might lead to the proliferation of the micro-organisms like staph on the fabric. They also noted that some studies "suggest that frequent contaminations with micro‐organisms resistant to desiccation (such as Staphylococcus aureus) must be considered likely."

And it's not just bacterial and fungal infections either. The buildup of discharge and fluids in your fabrics can also lead to a prodigious amount of itching in the affected area, according to Current Allergy. Frequently referred to as "contact dermatitis," it is a condition that is worsened with fluids and friction against the skin, like that of urine and what's present in vaginal discharge.

If you can, do your level best to change your underwear every day. You don't want to get a urinary tract infection or build up of candida just because you forgot to do your laundry. Might I suggest signing up for the Victoria's Secret coupons so that you never run out? Enough of those sales and you're good through the zombie apocalypse. You just might need a bigger knicker drawer.