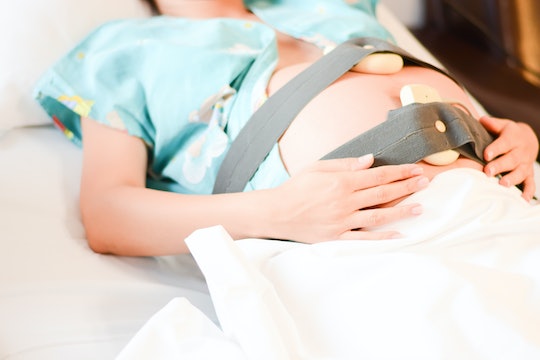 What Happens If You Pass Out During Labor?

The thought of baby through your vagina might make you weak in the knees. And if you've been anticipating this moment, it's also totally normal to be afraid of labor pains and the delivery process, so fearful that you believe you might faint. So, what happens if you pass out during labor? Ceridwen Morris, who teaches childbirth classes in New York City, told Babble that this is one of the top ten questions expectant moms ask.

The answer: fainting during labor is very uncommon. According to Morris, passing out is just not one of the ways women's bodies react to childbirth. Remember, your body has evolved to do everything possible to ensure the survival of the human species; it's just a biological imperative. Having said that, people are not robots, and everyone deals with pain (psychological and physical) differently.

So, why do people faint? People faint when there is a lack of blood supply going to your brain, which causes you to lose consciousness, noted Mayo Clinic. If you are prone to fainting spells, Morris recommended that you mention this to your birthing team, who will have an oxygen tank at the ready during your labor.

Although fainting during labor is not common, a lot of times women get sick during labor and might puke, as noted on the message boards on Baby and Bump. But that's usually because of the drugs administered during an epidural or through IV narcotics and not because of the labor process. According to another article on Mayo Clinic, opioids might cause nausea and an anesthetic or epidural might decrease blood pressure, leading a woman to vomit or feel faint during labor.

What's more common in the delivery room is the Daddy Anxieties, as described by NBC reporter and new dad, Tom Loftus. In fact, a couple years ago a video of a dad-to-be fainting during the birth of his child went viral. Poor guy. But here's the thing, why spend your time searching the internet for all the things that can go wrong during your labor? Sure, it's important to be prepared, but might I suggest you focus on all the awesome ways your life is about to change.