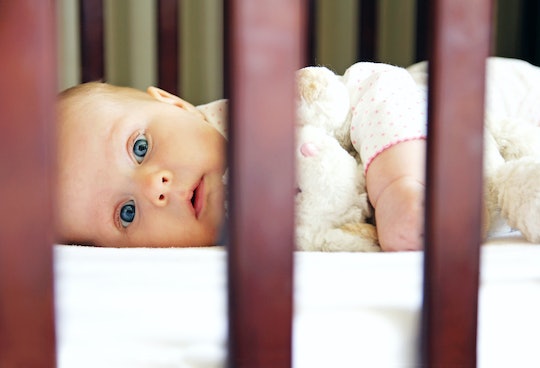 What Happens If Your Baby Stays Up Later Than Usual

It seems like a great idea, right? Put the baby down later, and they might just let you sleep in an hour or so later the next morning. Yeah, that doesn't necessarily work with babies. So, what happens if your baby stays up later than usual? Most likely, they'll wake up at exactly the same time as they usually do, or they might even wake up earlier. Yay babies, right?

Some of the most basic rules of baby sleep are actually counterintuitive and work in the opposite way us adults, especially us parents, would like them to work. While going to bed later so you can sleep in, or staying up later in order to be more tired, might work for an adult, it can really backfire with a baby. In fact, according to the Goodnight Sleep Site, the first rule of baby sleep is that babies have a pretty set body clock that's going to wake them up a certain hour in the morning and regardless.

Another rule of baby sleep is the more sleep a baby gets, the more sleep they're going to get. Sleep begets sleep, especially when it comes to babies. If your baby misses a nap, you're probably more than likely to think to yourself, "Well, at least the kid will be really tired when it comes to bedtime." In reality, and according to Parenting.com, you'll want to avoid your baby skipping naps if possible and put them down to bed even earlier than usual if they do skip a nap.

The Baby Sleep Site also encourages parents to be aware that an overtired and overstimulated baby is going to have a much harder time falling asleep at night, or even during the day for a nap. In fact, the site goes on to say overtired baby could likely wake up earlier than they should from a nap or a full (read: partial) night's sleep. For example, if you try to put your baby to sleep at 9:00 p.m., thinking they might sleep in until even 8:00 a.m., you're most likely going to get a baby who fights going to sleep because they're overtired, and a baby who wakes up and is very cranky for the next day.

The Baby Sleep Site also provides a handy chart for new parents, highlighting how much sleep their baby should get, depending on their age. A highlight of the chart is as follows:

Sometimes putting a baby to bed late is inevitable, whether you have an out-of-the-home engagements you couldn't skip and can't get home in time for bedtime, or you've gone to a friend's house for an impromptu backyard dinner. There are times when you'll just choose to live life a little instead of being beholden to your baby's bedtime and sleep schedule and, rest assured, your baby will likely adjust.

But if you're consistently putting your baby to bed overtired, or even if you don't have a consistent bedtime at all, you're running the risk of creating more work for yourself than you need to. Experts at the Baby Sleep Site suggest watching your baby for sleep cues that they're getting sleepy and building your baby's schedule around that natural pattern, rather than when you'd like a sleep in. You'll likely have more success and, as a result, more sleep.