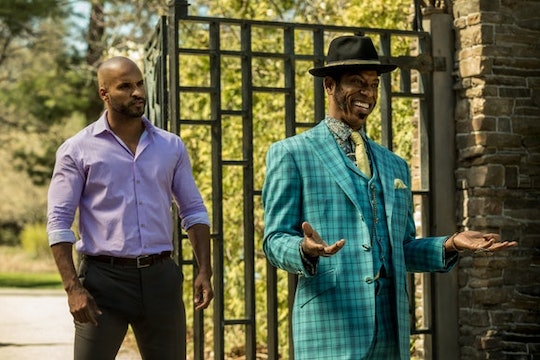 American Gods is a complex, interconnected story of warring gods and ancient history. Though it draws on real legends and myths, it's also more directly based on the novel of the same name by Neil Gaiman. Those who haven't read the source material may be wondering what happens in the American Gods book, and how much the show deviates from it.

American Gods airs every Sunday on Starz, but its second season has only just begun. That means it's only a fraction of the way into the story. There's still a lot to come, though not all of it will be adapted directly from the novel. Certain things stayed the same from page to screen, but others were added or invented. Still, if you're completely spoiler-averse, you should probably turn back now; any discussion of the book might be too revealing for those who'd prefer to maintain the element of surprise.

Much of the content is the same: both show and book are the story of a man named Shadow who finds himself on a road trip with the unusual Mr. Wednesday after dealing with a personal tragedy. His wife Laura and best friend Robbie were killed shortly before Shadow's release from prison, though Laura didn't stay gone for long. Shadow left a magic coin from the leprechaun Mad Sweeney in her grave, and it brought her back to life. If all of that sounds familiar, it's because you saw it all play out onscreen.

Shadow and Wednesday meet many interesting figures on their travels. They all turn out to be old gods Wednesday is trying to win over to his side in an upcoming conflict with much newer deities. Mr. World, Technical Boy, and Media are the new gods coming up against the ancient ones Mr. Wednesday wants to recruit: Czernobog, the Zorya Sisters, Mr. Nancy, Easter, Bilquis, and more. Along the way, there are detours into other gods and mythical figures, like the Jinn and his passing connection with a businessman named Salim.

These are all threads that run through the first season, though it didn't finish the story of the book in its finale. It only covered the first part of the novel, leaving plenty for Season 2 to explore. However, even though the names and events are more or less the same, the show did expand on several aspects. Laura has much more of a presence in the series and a much more active role; her tension with Mad Sweeney is all Starz, too.

There were certain updates that came from Gaiman, who is an executive producer on the series. In an interview with Gizmodo, Gaiman explained that Technical Boy had been a Matrix-obsessed cyberpunk in the book, but now he's more in line with the vaping young guys of Silicon Valley. Laura had a job change as well; in the novel she's a small town travel agent, but since those don't really exist anymore, she was turned into a card dealer at a casino.

While there are readjustments to the story and superficial changes, for the most part, American Gods has remained intact in its adaptation. Things may have been added, but it seems like very little was taken away.