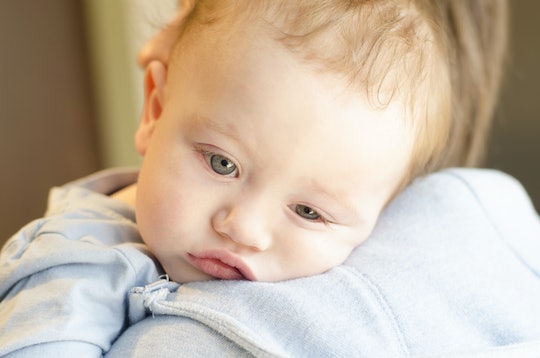 For adults at least, vomiting is frightening in part because you're no longer in control when sickness takes over. Usually, your brain triggers vomiting in response to some actual or perceived danger — an infection, for instance, or the ingestion of a poisonous substance. But what happens in your baby's brain when they vomit? And is throwing up as stressful for them as it is for us?

First off, it's important to draw a line between spit-up and vomiting. According to Kristin Gourley, IBCLC, a lactation specialist with Lactation Link, babies are usually pretty relaxed about spitting up, and they're most likely to spit up during and after mealtimes without experiencing any pain. In contrast, she tells Romper that "vomiting usually causes distress in the baby and you may notice heaving that you don't with spit-up. In general, baby will likely feel unwell and may have diarrhea or other symptoms like a persistent cough as well." More likely than not, babies don't enjoy vomiting any more than grown people do. Like us, they have no control over their body's violent response to a perceived threat.

Physiologically speaking, vomiting is complex. According to an article published by Colorado State University, the diaphragm sharply contracts right before you vomit, forcing the esophagus open. At the same time, abdominal muscles squeeze, forcing stomach contents up and out. Ultimately, the brain controls this response, triggering vomiting from one of two bilateral "vomition centers." (Yep, they're really called that.)

Weirdly, many causes of vomiting have little to do with your stomach, or with anything you've eaten, making it a troubling and sometimes mysterious symptom. Because babies are prone to becoming dehydrated, you should always call your doctor if your infant is vomiting. Remember, the difference between spit-up and vomiting depends on a baby's comfort level: spit up is no big, but vomiting is truly stressful. As Parents described it, vomiting is "traumatic" for kids and parents alike. And really, it should be. Throwing up is a warning that something has gone wrong.

OK, if you want to delve even deeper into the experience of vomiting — which Pharmacy Times terms a wretched experience — think of it this way: nausea, which generally precedes vomiting, throws the whole body out of whack. That seasick feeling disturbs the digestive system, and may cause your heart to race. You salivate more, and gastric acids increase. On top of all that, the vomiting reflex itself is physically violent and impossible to halt once it starts.

For infants, of course, it's best to err on the side of caution, and call your pediatrician if vomiting occurs. Without an MRI study, it's impossible to know exactly what goes on in a baby's brain when they throw up, but the reflex is largely the same as it is for an adult, and they're probably not much happier about it than grown people are. After you speak to your doctor, snuggles are definitely called for.

More Like This
25 Winter Solstice Baby Names For Your Magical Little One
6 Bizarre Superstitions About Christmas Babies
Baby Growth Spurts: When They Happen & What To Expect
40 Lovely, Lively, Lavish Girls Names That Begin With “L”