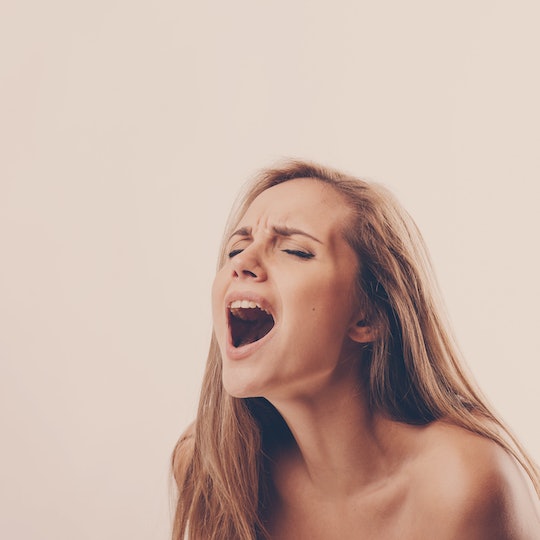 5 Fascinating Things That Happen In Your Brain When You Orgasm

Just because the average person isn't necessarily "thinking" all that much at the moment of orgasm, that doesn't mean your brain isn't super busy during that time. Even if you're mostly concerned with the stimulation of one particular part of your body at that point, multiple areas of your brain are stimulated, too. So what are some of the most fascinating things that happen in your brain when you orgasm?

Thanks in no small part to the many brave souls who've consented to having solo sexy time in an fMRI machine, scientists actually have a fairly good idea about what goes on in people's heads when they climax, and it's a lot more complicated than you might think. It's not just the regions of the brains connected to your obvious pleasure center that light up, for one thing. Your whole body is along for the ride, and your brain is totally in the driver's seat — that includes the moments leading up to and following the Big O, too.

“What we see is a gradual increase in all the brain regions leading up to orgasm,” Barry Komisaruk, Ph.D., behavioral neuroscientist and coauthor of The Orgasm Answer Guide, told BuzzFeed Life.

And then, when the big one hits? Look out! Your brain is up to all kinds of odd and amazing things.

More Like This
100 Relationship Questions To Ask Your Partner
Why Is My Discharge Brown? Experts Explain
How To Talk About Sex With Your Partner
Here's Why Your Vagina Burns After Sex
What Parents Are Talking About — Delivered Straight To Your Inbox