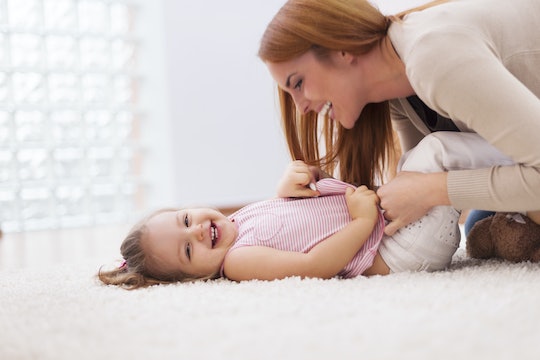 There's been a recent interest in the science of tickling babies lately, and not for the reason you might think. Nope, like anything in the 21st century, our obsession with reality television and social media came together to ignite a firestorm when a popular reality show star posted a video of himself tickling his 12-week-old daughter. The commenters were outraged, decrying the practice as cruel and unusual. But is it really? What happens in your child's brain when they're getting tickled might really surprise you.

The crazy truth is that there is evidence to suggest that tickling very little babies, that is, babies under 3 months old, might do more harm than good. I know it goes against every instinct that wants to make your child giggle by tickling their tiny toes or blowing raspberries on their chubby thighs and bellies, but, according to recent studies, your baby doesn't know it's you who's doing it. They just feel a strange sensation that forces them into laughter, and they're unable to identify the source or reason for it, noted Science Daily.

Imagine being deprived of your senses. You can't hear, see, or speak but to laugh or scream. You feel a tickling sensation on the inside of your thigh. You can't help but laugh — that's your body's natural reaction to the tickling — but you're also terrified. Who in the hell is tickling you, and why are they doing it? That's essentially what this study says your baby is experiencing.

Tickling, and its corresponding laughter, is a highly unique phenomenon witnessed in humans that is different from all other mammals, even primates like chimpanzees that are also observed engaging in tickling activities, according to Darwin. There is a distinct ontogenetic link between the tickle/laugh response and the development of social humor and laughter, according to Biological Psychology. Through the coaxed giggling and laughing, children learn the modalities of differing affect and develop the beginnings of their own sense of humor, even if they understand in the abstract that tickling is not always pleasant. It's as though their brains are saying "I can see that laughter makes me laugh more, and how this could be funny, but also, cut it the F out."

But that's not the only concern that arose from the conversation about tickling babies, many commenters expressed concern that tickling a baby will give them a stutter. Not to worry, that is a myth, according to Babble. Apparently, it's a pretty popular one. A quick search online leads you down a long line of people who believe this. It's just one of those things that gets built into the psyche of people and remains stubbornly there.

That being said, what happens in your baby's brain when they're tickled after 3 months of age but before childhood? Essentially, the same thing that happens to older children, but with a bit more restraint in the response, according to Neuroimage. They're still working, still learning, but those synapses aren't quite there, yet. However, it's no longer the cage of nightmares it was before. Now, it's just possibly funny confusion, and they know it's you doing it to them. I know my son started reaching out to try to reciprocate at about 6 months, and having them watch you fall into a fit of giggles, however genuine or not they may be, is hilarious.

So maybe wait until your baby is a tad older before you turn into the tickle monster. Don't worry, they'll get to a point where they think it's genuinely hilarious, and they'll let you know.