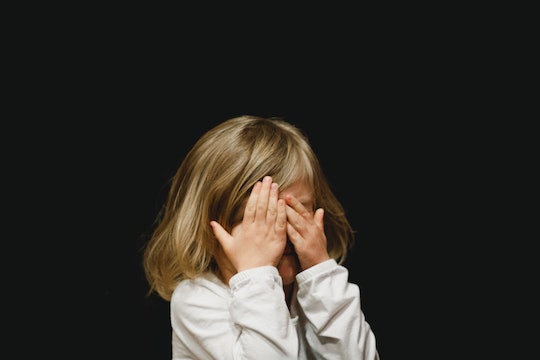 Here's What Happens In Your Kid's Brain When They're Embarrassed

Do you remember the first time you felt the red sting of embarrassment? (Personally, I vividly remember the day I forgot to wear underwear in kindergarten.) My 6-month-old, on the other hand, is shameless. Diaper explosion? Pssh. Oatmeal on her face? Whatevs. One day, however, she'll learn to blush — and I can't help but feel a little anticipatory sadness imagining that day. So, what happens in your kid's brain when they're embarrassed?

According to the Encyclopedia on Early Childhood Development (an awesome online resource for parents, by the way), embarrassment is one of the self-conscious emotions, along with jealousy, empathy, shame, guilt, and pride. Self-conscious emotions are secondary emotions, and the reason my baby doesn't feel embarrassed — no matter how much peach purée winds up in her hair — is that, in the first year, children only experience the primary emotions, like fear, anger, sadness, and joy.

Self-conscious emotions develop later, and indicate a child's growing awareness of a distinct and separate self. A self, in other words, that can be seen by others. Basic self-consciousness develops between 15 and 24 months of age, but embarrassment won't become really acute, noted encyclopedia contributor Michael Lewis, PHD, until children internalize societal rules and norms, around age 3. At that point, children realize not only that they can be seen by others, but also that others can judge them, and find them wanting.

Then comes the blushing, the racing heart, and the I-wish-I-could-just-disappear discomfort everyone feels in the face of negative exposure before others.

According to Parents, the best thing you can do for a child that reports feeling embarrassed is listen closely, and validate their feelings. Strive to be compassionate, because self-conscious feelings can be deeply bewildering, even frightening, to children just starting to experience them.

Instinctively, parents want to protect their offspring from every unpleasantness, but it's important to remember that embarrassment is normal, human, and an important part of learning to regulate themselves and cooperate with others. As Graham Music wrote in his book Nurturing Natures, embarrassment likely evolved to further pro-social behavior. Music cited studies performed by social-interaction researcher Dacher Keltner, demonstrating that while well-adjusted children felt embarrassment in situations designed to elicit it, children who struggled with emotional regulation tended to display a far less socially acceptable emotion — namely, anger.

So, take embarrassment as a good sign: one that proves your child cares what others think of them, and wants to participate fully and well in the world around them. (Even if they're still holding on to some of those cringe-worthy memories as adults.)