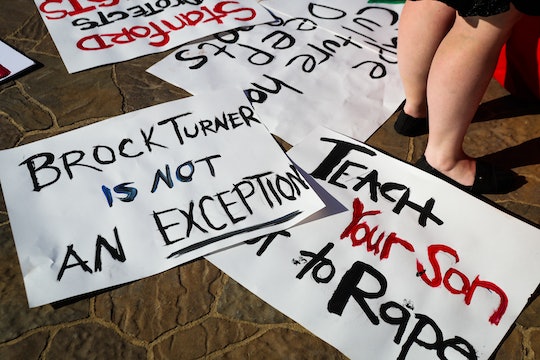 What Happens Next In The Stanford Rape Case? The Judge May Face Consequences

By now, you're probably well aware of the sickening details of the Brock Turner rape case, in which a Stanford University student (and talented swimmer! Let's not forget that, since the judge certainly didn't!) allegedly sexually assaulted an unconscious woman behind a dumpster at a party, and somehow got off with only six months of prison time. But given that Turner was sentenced over a week ago, and the case is still embroiled in conflict, what happens next in the Stanford rape case? The next step for those outraged by the outcome involves the judge who handed down Turner's light sentence.

Though prosecutors in the case requested a six-year sentence for Turner, who was facing three felony sexual assault charges, Santa Clara County Superior Court Judge Aaron Persky ultimately decided to change the "year" part of that equation to "month," saying, "A prison sentence would have a severe impact on him. I think he will not be a danger to others." And actually, Turner will likely only be in jail for half of his sentence. Assuming he has no disciplinary problems, Turner is scheduled to be released from jail on September 2, a mere three months after he was admitted, with an additional three years of probation. (Mike Armstrong, Turner's main attorney, did not immediately respond to Romper's request for comment.) That's perhaps a steep price to pay for "20 minutes of action," as Turner's father so mind-bogglingly refers to it, but it's a very low one to pay for rape.

So yeah, a lot of people are angry, and they are focusing that anger on removing Persky from his position so that he cannot hand down a similar sentence in the future. Over 1 million people have signed a petition on Change.org to oust Perksy from the bench. The petition, which hopes to "force impeachment hearings," claims,

Judge Persky failed to see that the fact that Brock Turner is a white male star athlete at a prestigious university does not entitle him to leniency. He also failed to send the message that sexual assault is against the law regardless of social class, race, gender or other factors. Please help rectify this travesty to justice.

Now, several veteran political consultants have joined the movement, along with the political action committee of the California Legislative Women’s Caucus. A juror from the case even wrote a letter to Persky, obtained by Palo Alto Online, expressing his shock and disappointment with Persky's actions, saying, "It seems to me that you really did not accept the jury's findings." And prospective jurors being called in for a completely different case are refusing to serve under him.

If the movement gains enough momentum, Persky will have to face a recall election. And given public sentiment against him, it seems entirely possible that he would not win it. That won't give the victim back everything that was taken away from her behind that dumpster, but it would be a step in the right direction.