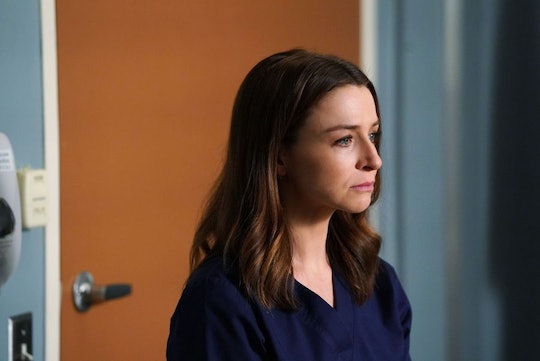 Amelia Has A Stressful Journey Ahead Of Her On 'Grey's Anatomy'

Grey's Anatomy returned for its fourteenth season this fall with a two-hour season premiere. The first episode was directed by Debbie Allen, who moonlights as Catherine Avery, but the second hour was directed by Kevin McKidd, who plays Dr. Hunt. His episode happened to focus squarely on the state of Owen and Amelia's relationship with a huge reveal at the end: Amelia has a brain tumor. Luckily, McKidd has been generous with interviews explaining his vision behind the episode, so fans can speculate on what happens to Amelia on Grey's Anatomy.

Amelia is the first to consent, high off nailing a tricky surgery. But while she's in the MRI machine, Andrew comes in and notices something on her scan. Carina sees it, too, and by the time Amelia has cleaned up and joined the group looking at the MRI results, she doesn't realize whose brain she's looking at. She excitedly inquires whose tumor is up on the monitors before slowly realizing that they're her brain scans from the orgasm study.

The fact that Amelia has a brain tumor is significant for several reasons. First, for years, people have been chalking up Amelia's behavioral issues to PTSD and addiction: her dad was murdered in front of her when she was little, she developed an addiction to prescription drugs and alcohol, her boyfriend overdosed next to her in their sleep, she discovers his unborn child suffers from anencephaly but gives birth anyway, he dies right after he's born, and then Derek dies. All of this trauma would easily explain Amelia's detached nature, impulsive decision-making, and seeming indifference toward her relationship with Owen. But now that we know she has a brain tumor, it reframes some of her behavior in recent years.

McKidd revealed in an interview with Entertainment Weekly:

She hasn’t known for many, many years, and this tumor has been growing for a long, long, long time and has been affecting all her choices and all of her actions and nobody knew it, least of all her. So it’s a tough one for Owen because he’s left with dealing with this person who, going forward, if they manage to remove the tumor, could potentially have a very different personality to the one that he married. She has a lot of questions about, 'Who actually will I be when this thing is taken away from me?' So it’s going to impact everything.

And the heavy-handed Shondaland brand of symbolism at play here isn't lost on anyone. Amelia is a neurosurgeon whose baby was born without a brain, and now she's suffering from the type of tumor she spends countless hours trying to figure out how to remove from her patients. As with most of Shonda Rhimes' flawed female characters, Amelia has been hit with the very thing she's dedicated her life to obsessively controlling, manipulating, and solving. We'll see how she responds to not being in control as Season 14 plays out.