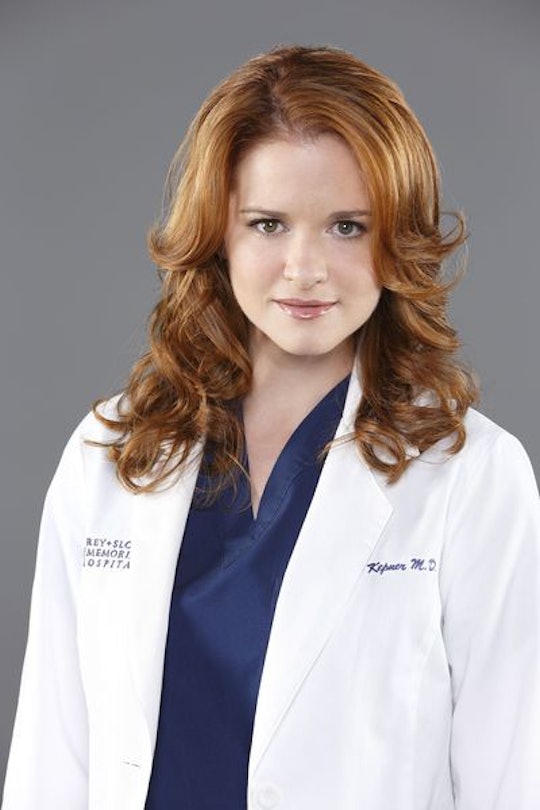 Since April started working at Grey Sloan Memorial Hospital, or Seattle Grace Mercy West as it was called back in the day, she's gone through a lot of ups and downs. She found love, she lost love, her son died, and then she had a beautiful baby girl. However, now, April is struggling through a major crisis of faith and she appears to be in a really dark place, leading many fans to wonder what happens to April on Grey's Anatomy?

When it was first announced that Sarah Drew, who plays April, would be departing Grey's after this season, fans quickly became anxious about what that meant about April's fate. Prior to the announcement, April had already been struggling. It began when three different patients all died in the span of one night after it seemed like they would live. One of those patients was the wife of April's ex, and almost husband, Matthew, which made the whole situation even worse. Another patient was a young black boy who was shot by the police after trying to enter his own home through a window (he forgot his keys).

The awfulness of that night had April questioning why God allows these things to happen and by the end of the episode she was seen showering with an intern. April's uncharacteristic behavior has only spiraled more from there. She's become known for partying and drinking with the interns and she's gotten irrationally angry multiple times recently. It wasn't until she, surprisingly, ended up having a conversation with Amelia's mentor, Tom, that April revealed how she'd been feeling towards God lately.

She first admitted that she wished God was dead and then went on to argue that people who don't follow God's teachings have "no consequences," while others, presumably herself and Matthew, live by God's teachings and are mistreated. Although Tom ended up opening up about his own "fight" with God and it seemed like maybe things would turn around for April, they only got worse.

On Thursday night's episode, April took over the intern trauma training, and became quite excessive with their tasks, even going so far as to spray them with the hose to simulate rain. And then at the end of the episode when Casey revealed that he actually paged April to get her to leave the training to "cheat," just like how she ended up using the ambulance during her training session back in the day, April totally flipped out.

It made her start reflecting on how the very next day one of her patients died, and how when it comes to trauma surgery, you can do everything right and your patient could still die. She started listing scenarios in which patients died, not by name, but with enough detail that it was clear she was talking about Matthew and his wife. And then things got really bad when April started doing chest compressions on one of the trauma dummies, not stopping until DeLuca pulled her away.

Later on, when Jackson tried to discuss what was going on with her, she deflected and tried to kiss him instead, but he pushed her away, and let her leave, which may prove to be a grave mistake. April is obviously not doing well and whatever she's going through, she hasn't been able to figure out how to get through it on her own. Instead she seems to be getting worse and worse with each passing week and it's hard to imagine her story ending well at this point, especially with this being her last season.

Although I don't want to believe it, it definitely seems like the show is leading to April being killed off. However, maybe it's not too late for April to be saved from herself.