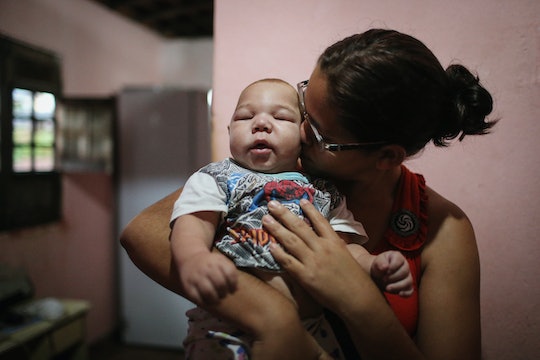 What Happens To Babies With Microcephaly? Thankfully, It's Not Fatal

While the risk of a possible Zika outbreak in the United States has pretty much been confirmed by the Centers for Disease Control, many of the possible health risks are still being researched. The symptoms of Zika, much like a bad flu with a rash included, usually pass within a week or two, but the risks to pregnant women and their fetuses are much more serious. In Brazil, a Zika outbreak has led to some 4,000 documented cases of babies born with various neurological disorders, the most serious of which is microcephaly. But what happens to babies with microcephaly is still not exactly common knowledge.

Microcephaly can be diagnosed during pregnancy and as part of their recommendations for possibly infected pregnant mothers, the CDC recommends ultrasounds early on to determine whether or not a fetus is developing normally. A baby with microcephaly is born with a head "significantly smaller" than other infants, according to the Mayo Clinic, which means that the brain, too, has developed abnormally. This leads to all sorts of complications for the infant after birth.

According to the CDC, the most common effects of microcephaly in infants are similar to the symptoms of any other developmental disorder, like being more prone to seizures, feeding problems that make swallowing difficult, vision and hearing issues, and not hitting "developmental milestones," such as having problems with speech, walking and other balance problems, and intellectual disabilities.

Actually, microcephaly is a general term for a wide array of medical conditions, according to CBS News. Microcephaly isn't just an outcome of Zika, but can occur under other conditions, like chromosomal issues like Down syndrome, or if the fetus has been exposed to substance abuse. In fact, sometimes infants are born with microcephaly but has normal brain function. "The prognosis is entirely dependent on the cause," Dr. Nassim Zecavati, of the Georgetown University School of Medicine, told CBS News back in February.

In countries like Brazil, where the Zika outbreak has caused "a generation" of children born with microcephaly, the medical issues turn into economic ones, as more caregivers are needed to help treat the symptoms, according to CBS News. For pregnant women right now, it's important to remember that Zika doesn't always cause microcephaly. But it could. Taking preventative measures to protect women from being bitten by the bug or contracting the virus and knowing to ask your doctor about the risks is all anyone can do while Zika remains a threat.

More Like This
Why Babies Love Water, According To Experts
This Is What Happens To Your Vagina When You Stop Having Sex
Here's Why Wearing Long Sleeves In The Summer Can Be Good For Your Baby
How To Breastfeed A Baby With A Cleft Lip Or Cleft Palate