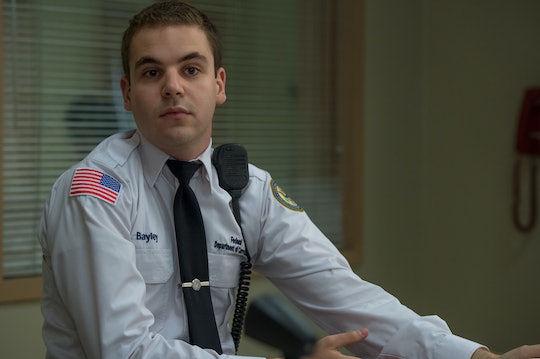 Bayley May Face Consequences On 'OITNB'

Warning: spoilers from Season 5, Episode 6 ahead! The fourth season of Orange is the New Black came to a traumatic end. When Poussey was murdered by C.O. Baxter Bayley during an altercation in the Litchfield cafeteria, reactions were split both onscreen and off. Fans were near-unanimously horrified to see such a beloved character go out in such a brutal way, and Poussey's nearest and dearest on the show were similarly enraged. Taystee wanted Bayley to be punished for what he had done, but Caputo thought Bayley was a good person who unintentionally did an awful thing. So what happens to Bayley on Orange is the New Black Season 5?

What happens to Bayley is what happens to numerous young white men in positions of relative authority who commit a heinous act: he got away with it. He was sent home after killing Poussey and no charges were filed against him for the crime even a few days later. In a statement to the press following Poussey's death, Caputo basically dismissed the entire thing in defense of Bayley, referring to the C.O. as a "victim of circumstance" without mentioning Poussey at all. If Caputo had his way, then Bayley would be back working as a corrections officer, pending investigation. Season 5 caught up with Bayley, but so far his fate — and any possible punishment — remains unclear.

Bayley was obviously in a bad way following Poussey's death. The show presented him as dopey and privileged but not a bad person, so he was affected by the fact that he had killed someone. Throughout the first half of Season 5, Bayley was pretty much falling apart. He tried to cope with his feelings of guilt by getting hammered and turning himself in to the police, but he was too drunk to be clear about why he was at the police station. No charges had been filed against him anyway, so he was released with little fanfare.

After that, Bayley tried to commit suicide by drinking the bottles of dye his parents used in their dog grooming business, but the dye was non-toxic and therefore harmless. However, that was enough for his parents to finally notice something was going on with him even though they still didn't take it seriously enough. They told him he needed help, which was something Bayley very much agreed with. Though Poussey's death was technically an accident, that didn't mean that Bayley shouldn't be held accountable — something he appeared to believe, too. But by Episode 6, it's still clear if he ever will be. He stated:

I got myself arrested. I have been begging to die. And all you guys wanna say is, 'Things will be fine,' and 'Life's complicated.' Finally! Make sure they lock me up somewhere for a very long time. Please!

Everyone around Bayley was ready to dismiss what he did and encourage him to move on even though Poussey had died a mere two days earlier. Everyone seemed willing to let him slide because he was a "good" kid. And that's something that feels all too familiar and all too frustrating. He should be arrested for what he did, but it's not clear yet if he will be.