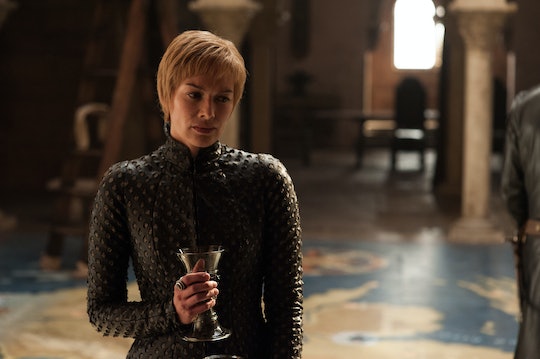 Cersei Has Many Enemies On 'Game Of Thrones'

Cersei Lannister is a character beloved by few, but who fascinates us all. So what happens to Cersei in Game of Thrones Season 7? Will she even make it out alive? She's gotten herself to the Iron Throne, but so far the costs have been pretty steep. Will she be able to maintain her power and sustain it? I'm looking over some theories, and it looks like she might be in trouble.

From where the show left off at the end of Season 6, and from what I can glean from the longer trailers for Season 7, all of the characters are finally coming closer together after months and months of being flung across the world. Tyrion, Daenerys, and Varys are all together and heading back to Westeros (a dream team if there ever was one). Arya seems to be on her way to Winterfell. Jon and Sansa have already met up, taken back Winterfell, and are ready to defend Jon's position as King in the North (or fight each other for power). Dark horse Euron Greyjoy is turning out to be pretty ambitious, and will most likely try to align himself with someone powerful to make his way to the Iron Throne. And it's even been confirmed that Gendry will be returning to Game of Thrones at long last.

So what does all of this mean for Cersei, the current Queen of Westeros? It's going to get messy, to say the least. Here are some theories about what's next for this complicated character.

She'll Meet Up With Euron Greyjoy

Euron Greyjoy didn't have a huge role in Season 6, but viewers learned enough about him to understand that he's ambitious, and he thinks marriage might be a good way to establish his position. He was going to try to marry Daenerys before his niece Yara got to her first and formed an alliance. The next logical step would be to try to hook up with Cersei. This could be a good move for her, as she's going to need some help to defend herself against Dany's incoming army and Jon Snow in the North.

This theory has been around for a while, and there's a lot to support it. In her prophecy, Maggy the Frog predicted that Cersei would marry the king (Robert Baratheon), and that she would be queen but a younger, more beautiful Queen would take her place. This could refer either to Margaery or Daenerys, and arguments can be made for both. She also said that Cersei would have three children and that all three would die, all of which has come to pass.

The prophecy further states, "And when your tears have drowned you, the valonqar shall wrap his hands about your pale white throat and choke the life from you." 'Valonqar,' means "little brother" in high Valyrian. While Cersei always assumed this referred to Tyrion, it is known that her twin brother Jaime was born just moments after her, and thus is also technically a "little brother." From a narrative perspective, it would make the most sense for Jaime to be the one to finally kill her in the end. Jaime could want to get back at Cersei for causing the death of Tommen. As he was the one to actually kill Mad King Aerys, there's a certain symmetry in him also being the one to kill the Mad Queen Cersei.

Arya has been on a quest to kill everyone who's wronged her and her family since the end of Season 1. As the person most instrumental (aside from Joffrey) for her father's beheading, Cersei is at the very top of that list. Redditor Greypiano argues that Arya's entire character arc has been leading up to this. Redditor Lost1127 takes it a step farther and argues that Arya will do the deed wearing the face of Jaime Lannister, thus fulfilling the "little brother" part of the prophecy.

Redditor dremlingHouseLannister has a different theory, stating that having Jaime kill Cersei would be too obvious, and George R.R. Martin is never obvious. This argument circles around the fact that "little brother" is said in Valyrian, indicating that the killer will have Valyrian blood, aka the Targaryans, and could simply mean a "little brother." Now that the R + L = J theory has been confirmed, it's clear that Jon is the younger brother of Rhaenys and Aegon. He clearly has motive to kill Cersei, and he may just do it.

It's possible. As many on the internet have pointed out, the show omitted the last part of the prophecy that predicts Cersei will be killed by a "little brother." Maybe, just maybe, she makes it out alive. But I don't really think it's likely. As she says in the trailer, she has enemies to the West, enemies to the East, enemies to the South, and enemies to the North. Maybe she'll make it through Season 7, but when you play the game of thrones, you win or you die. It might be finally time for her to succumb to the latter.