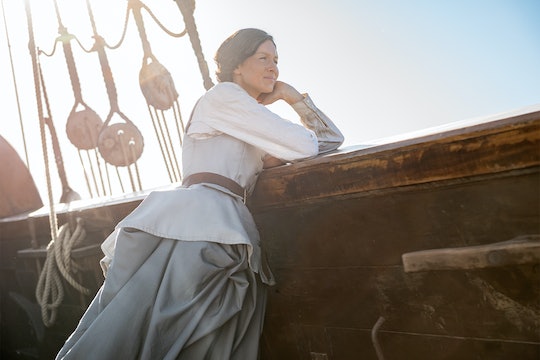 If there's one thing you can count on from Claire on Outlander, it's that she will, at some point, find herself in terrible danger. Sometimes she wanders off. Sometimes she is hell-bent on healing someone, danger or no danger. Sometimes she's just a woman in the 18th century and that sucks. So now you may be wondering what happens to Claire in the Outlander books. In case you couldn't guess, she finds herself in a bit of a sticky situation. Warning: book spoilers ahead!

The show left off with Young Ian being carried off onto a mysterious ship by a group of mysterious men in the midst of attempting to retrieve a buried treasure on Silkie Island. (Mondays, am I right?) Well then naturally Claire and Jamie were forced to set aside their marital issues and mounting tension (not the good kind) in order to set off on an immediate rescue mission to save him. This is particularly awkward considering Jenny, Ian's mother, was furious that Jamie allowed her son to sell contraband liquor. How do you imagine she'll react when they tell her he's been kidnapped by pirates?

Luckily, Claire and Jamie decide not to deliver this information to her face. Instead they head straight to France to find a ship and set off after their errant nephew.

You would think that being trapped on what is essentially a large wooden box in the middle of the Atlantic Ocean, Claire would not be able to get very far away from Jamie. Au contraire, friend. And that is due to a charming British practice that you may vaguely remember from your United States history classes in high school. This practice is called impressment. Basically, in order to recruit sailors to the British navy, which was not a very popular job due to the low pay and high probability of death, the navy was legally entitled to simply force people to work for them. It was like the draft, except with a kidnap-y flavor. In this way, the British ended up pressing into service around 15,000 American sailors in the 1790s and also fictional character Claire Fraser in the 1760s.

The trouble starts, as it usually does, with Claire wanting to be helpful. As occasionally happens on the Atlantic Ocean, Jamie and Claire's ship crosses paths with another ship, called the Porpoise. But the Porpoise is having a bit of a crisis. An outbreak of typhoid has killed off almost everyone. Again, this is just a floating box filled with human creatures so germs spread very quickly. In order to make up the difference, the captain of the ship intends to press a bunch of people from the Frasers' ship. This captain, clearly out of his depth, begs for a doctor, so Claire goes because — Claire.

In the books, it is as Claire is explaining to the few people left standing the basics of personal hygiene that the Porpoise starts moving. It turns out that the young captain (actually just the highest ranking guy left alive after all of the qualified sailors died) has exercised his right to press British subjects into service. Seeing how useful she is, he has pressed Claire. So now Claire and Jamie are separated once more, which will hopefully give her time to rethink the whole "maybe we were better off apart" thing.

So far, the series has hewn pretty closely to the narrative of the books, if a somewhat condensed version. That, and the previews, allow me to feel pretty safe in assuming that Mrs. Fraser will be pressed into service pretty soon here. That also means that we are likely looking at another full episode of Claire and Jamie apart. Don't shoot the messenger, guys.