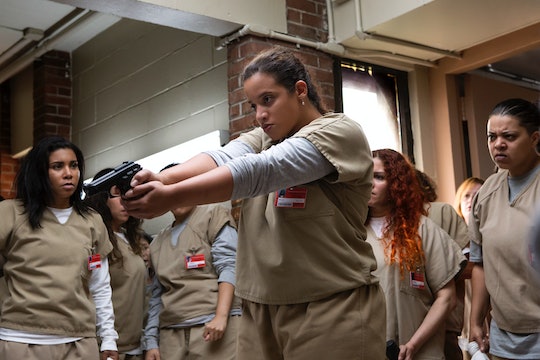 Daya Made A Difficult Decision On 'OITNB'

Warnings: Spoilers from Season 5, Episode 8 ahead! Daya didn't start the riot on Orange is the New Black, but she did take advantage of the madness to vent some of her own pain. Bennett's abandonment and the birth of her baby put Daya in a dark place that led to her decision to pick up the gun and point it at Humphrey at the end of Season 4. In the Season 5 premiere, she pulled the trigger. She thought she was causing less damage by shooting him in the leg, but he quickly started to bleed out. Shooting a guard is a serious offense that was sure to get her an equally serious punishment, but what happened to Daya on Orange is the New Black?

At first it seemed like Daya just wanted to pretend like nothing had happened. Once she lost control of the gun, she decided to remove herself from the situation by going outside, keeping a low profile, and working on her art. But what she did couldn't be undone, especially because another inmate's intervention caused Humphrey to have a stroke that worsened his condition. The rest of the inmates weren't going to be able to get amnesty for engaging in the riot if Daya didn't turn herself in, because they had promised non-violence and the shooting was the opposite of that. But they also couldn't force her to turn herself in, so Daya had a decision to make.

Daya's mother Aleida didn't want her to do it, which was perhaps Daya's biggest motivating factor. Aleida wanted her to claim self-defense because of Humphrey's terrorization (even though he hadn't actually done anything to Daya); he couldn't speak for himself after his stroke, so Daya's side of the story would be the only one out there. But Daya had enough bad advice from her mom to last her a lifetime. She wanted to do what she felt was right, especially because she had her own daughter to think about now. So she decided to sacrifice herself for the sake of the many.

Turning herself in for shooting Humphrey likely means that Daya will end up in Maximum Security for a very long time. Though former warden Figueroa mentioned offhandedly that Daya might get a special shortened sentence for her honesty, it seems much more plausible that she will actually end up with even more time on her sentence. Daya gave herself up to the guards in Episode 8, but by the end of the episode there was no information about her ultimate fate. She was last seen in handcuffs, getting into a car to be taken to Max.

It's not clear whether Daya will continue to be a part of the show going forward or not. Though most characters who went to Max were never seen again, Nicky did return eventually. Daya's future on Orange is the New Black is uncertain, but she's sure to be behind bars for a very long time.