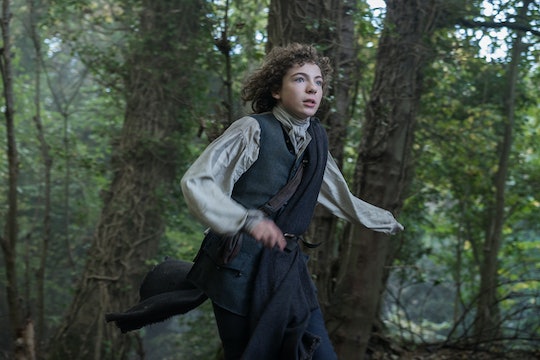 Fergus' Story Is Far From Over On 'Outlander'

Though the central action of Outlander always centers around Jamie and Claire, the pair are generally surrounded by a large cast of supporting characters who are beloved to varying degrees. One such beloved character is their little adopted orphan child, Fergus. So what happens to Fergus in the Outlander books? After being picked up by Jamie and Claire in France, the little erstwhile pickpocket returns with them to Scotland and becomes part of the family.

Outlander fans know that Jamie and Claire will be separated for 20 years before Claire finally gets her butt back to the 18th century. During this time, everyone she left behind in Scotland (not just Jamie) have to get up and move on with their lives without her. It still stings a little for me that she never said a proper goodbye to Fergus. She told him that she and Jamie viewed him as their own son, and was sick with worry when she realized he'd gone to fight in the battle of Prestonpans against the British. So after Culloden, what did Fergus do? The last he was seen in Season 2, Jamie sent him to Lallybroch with the deed of Sasine that transferred the property over to Young Jamie Murray, Jenny's son, which would protect it from being seized by the British.

I suspect that Jamie's other motivation for sending young Fergus, who around 10 years old at the time, on this important mission was to keep him out of harm's way during the battle. Fergus had already learned the hard way that the battlefield is not nearly as much fun and glorious as he imagined it would be. Fergus would be safe with Jenny and Ian at Lallybroch, where they could protect him from harm. Well, they could mostly protect him, at least. Warning: book spoilers ahead!

Obviously, Fergus wouldn't go back to France on his own to resume his life of pickpocketing. He's devoted to Jamie and Claire, and they vowed that he would always have a home with them. But that doesn't mean that danger isn't afoot everywhere in the Highlands at the moment. Following Culloden, the British army chased Jacobite rebels all over the Highlands to be hunted down and killed as traitors. In the books, this is why Jamie spent five years living in a cave, and came to be known to the locals as Dunbonnet, because he wore a dull brown cap and went around performing various good deeds — something that will most definitely play out on the show as well.

At one point, Fergus tried to bring Jamie a cask of ale, and was set upon by English soldiers who accidentally sliced off his hand (I know). One of the released photos from the show depicts a ragged looking Jamie with young Fergus in his arms, who appears to be cradling his arm while in a great deal of pain. Given this clue, it looks as though the hand-cut-off event is happening on-screen as well.

By the time Claire finds her way back to Jamie in 18th century Scotland, Fergus is a grown man in his early 30s. He now sports a very dashing hook for a hand. Fergus' official character description from Starz describes him as thus:

Born into a brothel, Fergus has grown up into a charming, devilishly handsome man with a strong sense of loyalty and decorum, despite his unconventional upbringing. He is the ultimate romantic, wearing his heart on his sleeve and falling in and out of love easily. However, Fergus’ devotion to Jamie has never wavered, making the Frenchman an integral part of the Fraser clan. Still, his debonair demeanor masks a longing for a lasting love and a permanent sense of belonging.

As an adult, Fergus will be played by César Domboy, who Americans will know from the film The Walk. Even as an adult, Fergus will be causing mischief when he falls in love with Laoghaire's daughter, Marsali, still a young girl at the time. But looking at what adult Fergus looks like now, what woman could resist? So while I'm most excited to see Claire and Jamie's reunion, watching her also reunite with her adopted son is probably second on my list.