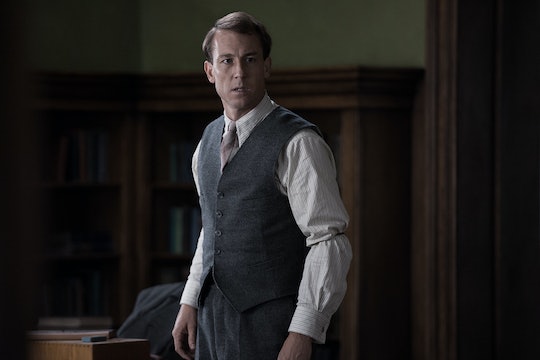 Though she didn't love him as much as Jamie on Outlander, Claire truly cared about her first husband, Frank Randall, and spent lots of time trying to get back to him and then trying to protect him once she'd decided to stay with Jamie. So what now? What happens to Frank in the Outlander books? Though they remained married and coparents for 20 years, their relationship never really recovered after Claire disappeared through the stones and then eventually came back. Whether you think that he deserved it or not, Frank's story ended in tragedy. Warning: book spoilers ahead!

Unlike Jamie, who is a paradigm of good, and unlike Black Jack Randall, who is the living embodiment of evil, Frank is a little bit of both. He's capable of being kind, gentle, and extremely loyal. But he's also prone to snobbishness and pettiness and he clearly resents Claire for having preferred someone else over him. While he is sorting through all of these demons and Claire tries to get over her love for Jamie for nearly two decades, the couple's marriage falls completely apart. In the show, this deterioration on Frank's part is played to perfection by Tobias Menzies, as he slowly realizes he is doomed to play out this loveless marriage for the rest of his daughter Brianna's life.

In the books, Claire is completely unable to sit at home and be the pretty housewife and mother that mid-century Boston demands. So she enrolls in medical school, as viewers saw in Episode 2 of Season 3, and befriends Joe Abernathy, a black man, as they bond over being mutually ostracized from their classmates and colleagues. In the book version, Frank becomes openly hostile to this friendship near the end of his life, even after all the years he spent with Claire, trying to learn how to deal with one another.

In the books, the last day of Frank's life ends in a knock-down drag-out fight with Claire over their daughter, Brianna. Frank announces that he is finally going to leave Claire. He's accepted a post at Cambridge in England, which he intends to accept. And he intends to take Brianna with him, though Claire is welcome to visit whenever she likes. I think you can imagine how well this particular argument went over. Obviously Claire said absolutely not, and then the fight escalated into a discussion over their marriage. Claire tells Frank she knows about his mistresses, and that she's counted six over the years. She also mentioned that she told them if Frank wanted to leave her she wouldn't stop him. He never did.

Frank accuses Claire of having an affair with Joe Abernathy, a transgression made all the worse because Joe is black (the horror). Yes, Frank indulges in a lot of ugly racism and sexism here that I try to forgive because it is his last night on earth, but he makes it really, really difficult. Finally, Frank asks Claire if she would miss Jamie as much as she does if Brianna and her bright red hair were not a constant reminder of him. Obviously, yeah, she would still miss him. So Frank takes off in a huff for a drive. He slips on some ice and dies. Will it play out this way on the show? Menzies has always made Frank a very sympathetic character so far, so it's difficult to say, but I think we can safely assume that, regardless of how he goes and under what circumstances, Frank is not long for this fictional world.

Because this is the work of Diana Gabaldon, of course the death is dramatic and filled with unresolved angst and tension. While Frank's death takes a tragic toll on Claire and especially Brianna, if he hadn't died, would Claire truly have looked into the truth about what happened to Jamie? And if she had, would she really have been able to leave? She promised Frank that if they were to be together, she would leave Jamie in the past and stop looking into him. So is it callous if I say, thank goodness Frank eventually dies? At the very least, it'll help bring Claire once step closer to Jamie.