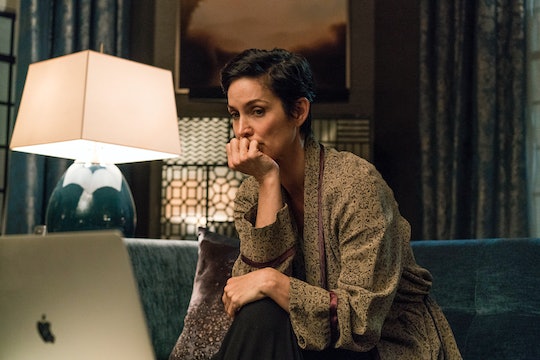 Warning: this post contains spoilers from Season 2 Episode 3. Love her or hate her, Jeri Hogarth has been an integral part of the Marvel Netflix series since she first appeared in Season 1 of Jessica Jones. And now it's been revealed that Jeri has Amyotrophic Lateral Sclerosis, also known as ALS, many can't help but wonder what it means for the fate of her character. So what happens to Jeri on Jessica Jones? The disease affects the nervous system and, unfortunately, there is no cure.

Sadly, there are no answers to be found in the comics regarding how this will play out for Jeri. In the Marvel comics, she is actually Jeryn Hogarth, a man, but more importantly, he never gets ALS and continues to live in the Marvel comic universe. Thus, Jeri's current storyline is one made up just for the show, which means anything could happen. Although with ALS, there's really only one way this ends for her. It's just a matter of when.

With ALS, Jeri could live for eight more years or she could only live for two. She truly has no way of knowing, but at least for now her symptoms aren't too severe and so she definitely won't be leaving us anytime soon. Hopefully. But the fact remains Jeri is working against the clock, and it makes sense that she'd want to spend her remaining days doing what she loves (kicking ass in court) instead of being pushed out by her firm. And who better to help her take down her partners than Jessica?

Now, on top of looking for answers about IGH, Jessica is on the hunt to dig up some dirt on Jeri's coworkers and hopefully help her former boss keep her job for as long as she can work. In the meantime, perhaps Jeri should reconsider taking Foggy up on his offer to help. At this point, she could actually use all the help she can get.

Still, even if Jeri does get what she wants and she's able to stay at the firm, one really has to wonder how long this will last. Even if she does have at least two more years to live, ALS affects the nervous system, which means Jeri's muscle spasms will become much more severe over time, making it difficult for her move, much less work. But while there is no cure out in the real world, one has to wonder if one exists in the Marvel Cinematic Universe. For example, perhaps IGH has a cure.

It's well known IGH aren't the good guys. In fact they've done a great job of killing a number of people. That being said, if that sketchy woman Jessica met at the bar is to believed, they were able to bring Jess back from the dead and her powers were a side effect of that action. Additionally, the pills Dr. Kozlov gave Will Simpson obviously worked to give him super strength, which means IGH at least has some qualifications in the medical field. Therefore, perhaps it's IGH that could end up saving Jeri, though at what price?

Whatever the cost is, there's no doubt that Jeri would pay it. If IGH actually approaches her with some kind of offer, Jeri would most likely take it. Hopefully, it doesn't come to that and there's some other way for her to be saved, but I wouldn't be surprised if the IGH storyline and Jeri's storyline end up crashing together before the end of the season.

You can find out what happens next with Jeri by watching Jessica Jones Season 2, which is now streaming on Netflix.