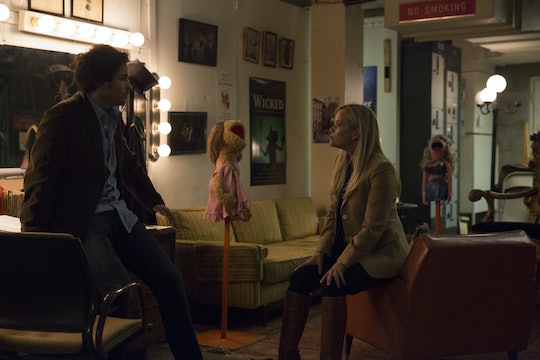 In all honesty, it's easy to forget about the murder that takes place in Big Little Lies. With all that happens prior to Trivia Night, there's enough drama to occupy us. Madeline and Joseph is an example. Madeline is married to Ed, but a few weeks ago it was revealed that she had an affair with her boss, Joseph, at the community theater. Not only that, but while they were on a drive to sort out their relationship, the two got into a car accident. So what happens to Joseph in the Big Little Lies book? Non-readers are in for a surprise.

What do fans know about Joseph as of now? Well, he's in love with Madeline and wants her to run away with him. Madeline seems less than enthused, which makes sense: she has Ed and her children, and Joseph himself is married as well. The car accident obviously derailed Joseph's fantasy, but he may still hope to convince her to leave Ed for him. Living in Monterey, others in community are just as nosy as Madeline herself is, so they know all about this affair. It seems the only adult not in the know is Ed himself... or is he? Is there a spectacular reveal on Trivia Night — are Joseph and Ed involved in the murder? (Warning: spoilers from the novel ahead!)

As it turns out, even Big Little Lies readers don't know the answer. Joseph's role in the novel is pretty miniscule. He's still Madeline's boss and the theater director, but that's where his role stops. Joseph is merely in the background — the affair did not occur in Liane Moriarty's world. Prior to the series premiere, viewers knew that there were going to be some differences in the adaptation. Reese Witherspoon spoke to Variety about her role as executive producer and as Madeline, and she hinted that the character had a major change in her story arc.

"Because I didn’t have anything to play but perfection, and I just think those people who are perfect [are] all full of s–t," she said. "It mainly came out of me not having anything to really put my teeth into." This all makes sense knowing that Witherspoon is talking about an affair. "I think there’s something fascinating about a person who projects perfection or is very judgmental of others who is clearly just swimming in their own discontent," she told Variety. Madeline and Joseph's affair certainly deepens her character; as Witherspoon notes, she is all about other people's drama, but she's full of it herself. I'm not sure what will happen, but I can probably guess it will be explosive.