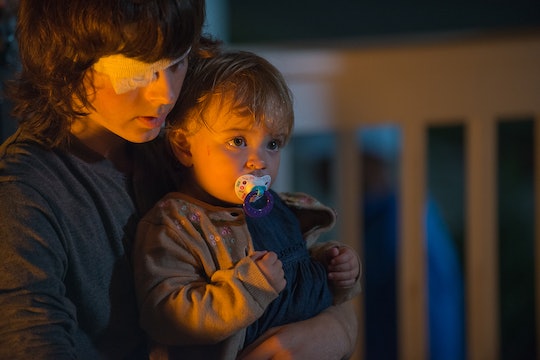 What Happens To Judith In 'The Walking Dead' Comics? She Has A Tragic Fate

Over seven seasons of The Walking Dead, Judith Grimes has been the luckiest baby in the apocalypse, dodging death at every turn and even managing not to cry when facing down the undead. Judith functions as a very physical reminder of the future, the hope that the characters have for a better world one day, and protecting her has always been of utmost importance. Rick even cited Judith as a big part of the reason why he was giving in to Negan's many demands. Now that she's in Negan's clutches, quite literally, some fans are worried about the fate of the tiniest Grimes member. So do the comics give any insight on the situation? What happened to Judith in The Walking Dead comics?

Judith is one of a few characters who hasn't been quite so fortunate in the comics as she has been on the show. On print, her arrival into the world of The Walking Dead was followed quickly by her departure from it, though things began slightly better for Comics Judith than they did for her on the TV show. Lori wasn't killed in childbirth in the comics; both she and Judith survived and were totally healthy. However, the trouble came when the Governor unleashed an attack on the prison where everyone was holed up. Lori was fleeing with Judith in her arms when a stray bullet ended Lori's life, causing her to fall on top of her newborn baby and crush her. Pretty bleak.

Keeping Judith alive was a decision the show made to inject some optimism into a very disheartening world. In an interview at the Loyola Marymount University School of Film & Television in 2015, executive producer Gale Anne Hurd spoke about why they chose not to kill Judith on the show. "Because we don't like to follow the comic book exactly and we felt it was very important to have that innocence and that hope," she said. "It's a very, very bleak world. We've seen that and as long as there's an innocent child, a baby that they can all care for we thought that that was keeping hope alive."

Judith serves an important purpose in the show just by existing, which might make it seem like she's safe for a while. But if Season 7 has proven anything, it's that it's out to crush every last iota of hope any of the characters had. When "Sing Me a Song" ended with Negan having a cuddle with baby Judith, it was chilling, and according to Hurd, fans are right to be worried. On Talking Dead, she said, "[Negan] could do anything with Judith. He could kill her. He could not. He could show a tender side that's gonna throw even more people off balance."

It's unlikely that Negan will do anything to Judith, however. As unhinged as he is, Negan likes to think that he functions by a code of conduct; killing Judith would be an unprovoked cruelty even if Negan does owe Carl a punishment for killing two Saviors. Little Ass Kicker will probably continue to be safer onscreen than she was in the comics, for a while at least.