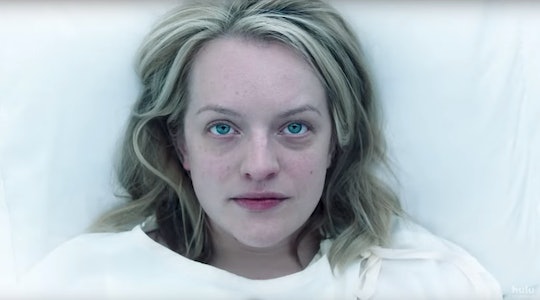 The Future Of This 'Handmaid's Tale' Character Is Very Uncertain

Things sure are getting intense in Gilead. In episode seven of The Handmaid’s Tale, Ofglen’s bombing of the Red Center managed to destabilize the government and leave an ashy shadow over the future of the colony. Their heinous, authoritarian protocols, along with their complete disregard for human rights is infuriating enough, but not knowing what June’s future holds is equally frustrating. She’s nearing the end of her pregnancy, so what happens to June after she gives birth?

Depending on how June plays the situation, her future could go a number of ways. As of now, she is doing a great job of pretending to be compliant with Aunt Lydia’s directions, and is being as respectful as she can be to the Waterfords. If she manages to stay in their collective good graces, there may be a chance she gets to stick around and spend a few months with the baby, just like her friend Janine did.

When Janine gave birth to the baby she conceived with Commander Warren, she was allowed to live in the Warren’s home for some time so she could nurse the baby. Of course, she wasn’t able to spend actual quality time with her new baby, but she did get to bond with her while she breastfed. At the time, this may have been the norm in Gilead, and there is a chance that June is given the same chance, but because Janine ended up running away with the baby to jump off a bridge, I’m sure the rules have gotten stricter.

But there are a lot of factors that would weigh in to how June is treated after giving birth. The biggest influencer on her future is Serena, who absolutely hates her, and she’s even voiced that she wants her out of their lives once the baby is born. Commander Waterford does have a thing for June, so there is a chance he convinces Serena to let her stick around. Either way, it won’t be a long-term arrangement, and as per Gilead’s protocol, June would probably have to go back to being a handmaid for someone else.

Another huge player in June’s future is Aunt Lydia. After her failed escape attempt, when June was returned to Aunt Lydia’s custody, her defiant attitude prompted Aunt Lydia to map out a horrific future for her. She told her that if she did not submit and comply to their ways and rules, she would be chained to a bed until the baby was born, and then executed shortly after. So, her only options are to accept the torture with a smile on her face, or die. Either way, the outcome is heinous to say the least.

But after the recent bombing of the Red Center, the return of Emily (the first Ofglen), and the pivotal meeting in which the handmaids find the courage to introduce themselves by their real names, it looks like something rebellious is brewing. This could mean that there is hope for June to be reunited with her daughter, Hannah, and possibly getting out of Gilead for good. But I don’t think much can happen without some sort of help from Fred Waterford. He's shown tiny bits of compassion to June in the past by taking her out, getting her magazines to read, and sneaking her a picture of Hannah. Even though he remains consumed by his power and antiquated beliefs, there's small part of him that softens up to June, and whether it's out of lust or compassion, I think he will play a part in which way her future goes.

The Hulu series has gone way beyond the original Margaret Atwood story, so there’s no way to predict what is to come. With a handful of episodes left in Season 2 and confirmation that the series has been renewed for a third season next year, you can guess that June’s story is far from over. I just hope that she finds a way to bring Gilead down, and get justice for all the atrocities they’ve committed.