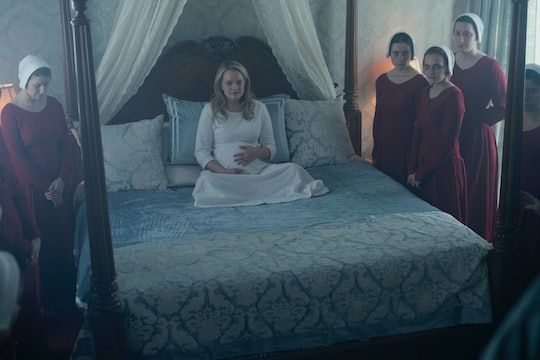 June's plans for escape were complicated by her pregnancy on The Handmaid's Tale, especially as she got closer and closer to her due date. Fleeing Gilead began to seem truly impossible, though June gave it her all in "Holly" even as she went into labor. Her previous complications meant that it would be a difficult birth, made more difficult by the fact that June was alone. So what happens to June's baby on The Handmaid's Tale?

June was eventually forced to give up on the idea of escaping for her own health and the health of her child. She chose to reveal her location, presumably so she would be able to receive medical attention after her baby was born. Unfortunately, that also guaranteed that she would not be able to leave Gilead after delivering her daughter, who she named Holly after her mother. She had a short respite with her newborn, but in the final moments of the episode, the lights of approaching cars outside suggested that June would soon be taken into custody once again.

Though Episode 11 didn't explicitly state what happened to June and Holly after the cars arrived, it isn't too hard to extrapolate based on what viewers have already seen from the show. June has never been able to get away from the Waterfords, and Holly might not be able to either.

June's prior escape attempt may be a good indication of how Gilead will treat her second attempt. When she was discovered trying to cross the border in a small plane in earlier episodes, she was dragged back to Boston and kept under watch before she was returned to the Waterfords' home. It seems like the same thing will happen now, as confirmed by the promo for Episode 12, "Postpartum." It shows June back in her old bedroom, much to Serena's displeasure. Serena is furious that Fred would allow June back after everything, especially since the original plan was to send June away immediately.

But the baby changes things. A successful pregnancy and birth grants June some level of protection, at least from execution or banishment to the Colonies, but the rules of Gilead mean that she has no control over her fate or Holly's. According to the government, both June and her baby are subject to the whims of Fred and Serena Joy. The Waterfords have complete power over June, and Holly is supposed to be their baby.

The promo for "Postpartum" shows Serena embracing her role as a mother, referring to Holly as her child and smiling at the baby in her crib. Though Holly appears to be healthy and out of physical danger, what happens to her now is still one of the worst possible outcomes. Throughout her entire pregnancy, June feared her child being raised in Gilead by the Waterfords, but it looks like that is exactly what's going to go down.

There are still two more episodes in Season 2, but unless something drastic changes, Holly will likely be treated as Serena and Fred's daughter. But the fact that June remains in the house is promising, even though running away seems more impossible than ever. If June couldn't get out of Gilead on her own, then it's hard to see how she could manage it so soon after giving birth, and with a much sought-after newborn in tow. Serena wants Holly to be hers, which means it won't be easy for June to keep her daughter for any length of time.

But June did assure her baby that everything would be okay. Even though the odds are stacked against her, June has demonstrated an incredible amount of strength and perseverance. She will probably do everything she can to keep her promise to Holly. Hopefully, she'll succeed.