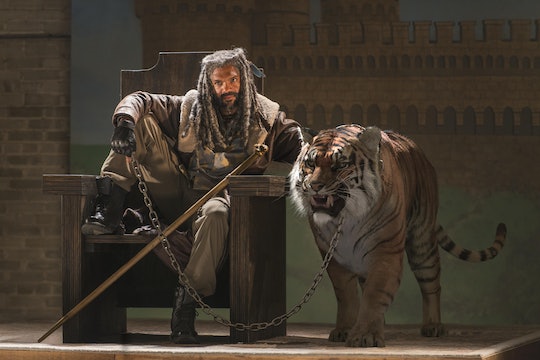 King Ezekiel had a dramatic introduction on The Walking Dead that was worthy of his background in the theatre, but he hasn't been seen very often since. As the leader of a flourishing community that has remained relatively unharmed by the Saviors (though he does comply with their rules), Ezekiel is in a unique position in the world of the show. It's one that could make him a potentially useful ally in the future if he ends up making contact with Rick and his group, which is something that does happen in the comics the show is based on. In fact, what happens to King Ezekiel in The Walking Dead comics could give fans a hint about his fate on the show. Warning: TWD comics spoilers ahead!

While there's a lot of overlap between King Ezekiel and his comic book counterpart, not everything survived the transition from page to screen. And some things are so far in the future that there's no guarantee they'll happen on the show too. But in the comics, Ezekiel does eventually prove himself a valuable ally when Jesus brokers a meeting between him, Rick, and Dwight (that would be Negan's right hand man) to deal with the Savior problem. Ezekiel has everything the Alexandrians need to fight a war: supplies, soldiers, and a massive tiger. Those are always useful in battle.

However, it's not that easy. Ezekiel loses a lot of people in the fight against the Saviors; he even loses his beloved tiger, Shiva, when she gives her life to protect him from a horde of walkers. All that loss overwhelms Ezekiel and he falters, unable to hold onto his position as a leader as easily as he could before. For a while it looks like depression may keep him from the final battle, but eventually he rallies and rejoins the fight. After Negan is defeated, Ezekiel returns to ruling the Kingdom. He also gets romantically involved with Michonne, which is one major difference from the show, where it looks like he and Carol might end up connecting.

The story jumps forward in time after Negan's defeat and a new community appears to cause trouble in post-apocalyptic paradise. They're called the Whisperers and they don't mess around. Dressed up in zombie guts, they're incredibly territorial and when their land is infringed upon by Rick's people, they take their revenge by quite literally taking some heads. One of those heads belongs to Ezekiel, bringing his story to an incredibly tragic close.

There's no way to know if the show will follow Ezekiel's comic journey down to the last detail, but it does provide some clues about what may happen to him. One can only hope that he manages to avoid the whole beheading thing, because that would be a real bummer of a way to end his reign.