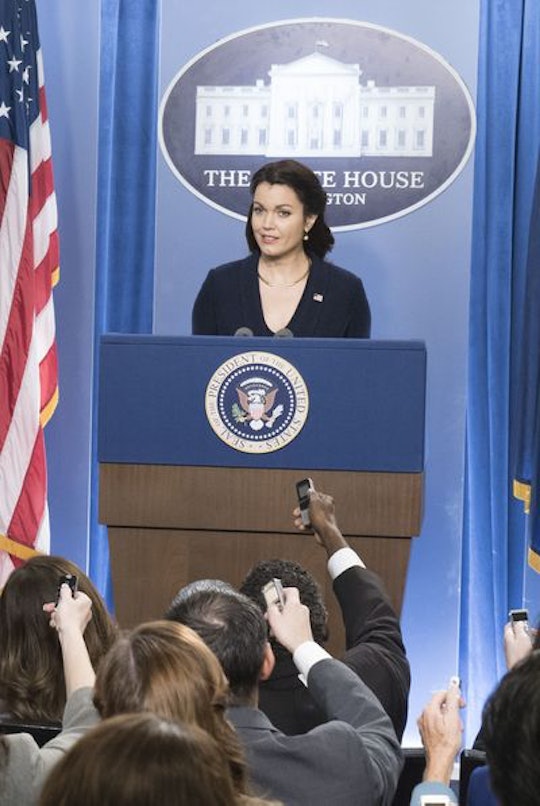 Mellie's Fate Is In Olivia's Hands On 'Scandal'

Mellie has been through a lot over the course of these seven seasons of Scandal. She was assaulted by Fitz's father, Fitz had a long and later very public affair with Olivia Pope, her eldest son died in her arms, and now she's being framed for a plane hijacking. With Vice President Cyrus Beene pulling all the strings and having pretty much everyone in his pocket, one has to wonder what happens to Mellie on Scandal now?

Although Olivia may have made some mistakes that led to her downfall, she was right to think that the men around Mellie would attempt to take her power away from her. That became quite clear in the latest episode, "The Noise," when Cyrus' true plans were revealed. It turned out Olivia was right all along and he did plan his own hijacking and the reason was so that he could frame Mellie. He pulled in his old henchman Charlie to be the fall guy, had him beaten to a pulp, and then sent in the closer — Jake — to finally get Charlie to confess that it was Mellie who hired him to hijack Cyrus' plane, even though he knew she had nothing to do with it.

If you recall, Jake and Mellie had a quasi-romantic moment, in which Mellie pulled away. Cyrus successfully pulled Jake to his side by reminding him that Jake has always been and would probably always be everyone's second choice. He was Olivia's second choice after Fitz and Mellie's second choice for chief of staff after Olivia.

So as of now, Jake is officially Team Cyrus, which leaves Mellie without any allies in the White House. Naturally, she of course went crying back to Olivia, and asked her to kill Cyrus. However, Olivia was just starting to regain everyone's trust and while surely no one would really be crying over Cyrus' death, especially after what he did to Charlie, murder doesn't fall in line with the new and approved Olivia.

Still, if anyone can get Mellie out of this mess it's Olivia. It's pretty much what Olivia has been saying all season long — Mellie needs her. So while she probably won't kill Cyrus — no matter how closely the promo for the next episode zooms in Olivia's now iconic murder chair — she'll figure out a way to save Mellie. Hopefully. However, if Olivia can't figure out a way to get Mellie out of this hole she's found herself in, it's unlikely Mellie will make it out of this unscathed.

Not only does Cyrus have Jake on his side, he also has the the legal counsel, Gary Clark, in his pocket as well. Now with Charlie's confession they really have everything they need to get Mellie impeached and maybe even sent to prison. However, even if Olivia, or someone else kills Cyrus, that wouldn't look good for Mellie either. Her first VP already died so if Cyrus dies too it'll definitely start to look suspicious. And then if Cyrus is found guilty, it won't exactly look great for Mellie either. He was her VP pick, after all.

Still, Olivia's definitely fixed worse situations so my faith that she'll be able to pull this off is still pretty high. Plus, if Fitz was able to remain president after his affair was revealed and he got a divorce, I'm pretty sure Mellie will be able to stay president even though her VP tried to frame her with a plane hijacking. At least, one would hope.