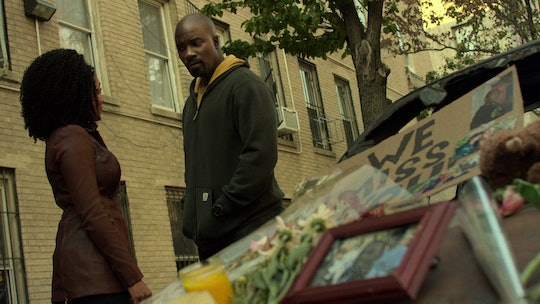 During The Defenders, Misty suffered a serious injury while trying to protect Colleen and Claire from Bakuto, a member of the Hand. In the fight, Bakuto cut off Misty's right arm, leaving many to wonder what will happen next with her story. Well, one way to find out is to learn what happened to Misty's arm in the comics. Because whether you realize it or not, her journey is only just beginning.

In the comics, Misty attempted to get rid of a bomb, but it, unfortunately, exploded and took her right arm. Because of her heroism, Tony Stark, aka Iron Man, gave Misty a bionic arm, similar to the one the Winter Soldier has. This has led many fans to hope there will finally be a crossover between the Marvel films and the Marvel Netflix series. If anyone would make an appearance in one of the Netflix series, it'd make sense that it be Tony. He was just in NYC working with Spiderman, after all. Still, it seems a little unlikely that the films and shows will actually mix, but that won't stop fans from hoping.

After the loss of her arm, Misty was given a desk job in the comics, no longer allowed to be an active duty cop. Unsurprisingly, Misty was unsatisfied working at her desk, so she left the police force and started a private investigation business with Colleen Wing. It appears this storyline, or at least a similar one, will be used on Iron Fist, since Misty will be joining the cast for the second season. Additionally, this also hints at the start of the "Daughters of the Dragon," which was the name given to Colleen and Misty when they fought together as a duo in the comics.

Misty's move to Iron Fist also has many fans questioning if she will have a romantic relationship with Danny as she did in the comics. At the moment, Danny and Colleen are in a pretty serious relationship on the show and it doesn't seem like much could change that — but you never know. Just as the shows eventually put together Luke and Claire (who also dated in the comics), the same could happen on Iron Fist.

Whether or not Misty and Danny end up together, this turn in Misty's storyline is one many fans have been anticipating and are very excited to see play out. Most viewers weren't happy with the first season of Iron Fist and hope that the addition of Misty will spice up the second season, bringing it to the level fans have expected from the other Marvel Netflix shows.