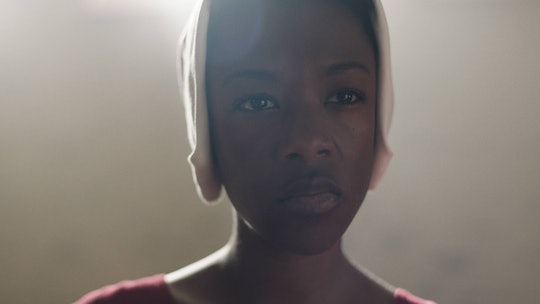 Moira's Story In 'The Handmaid's Tale' Book Ends Without Closure

The upcoming Hulu adaptation of The Handmaid's Tale, Margaret Atwood's dystopian classic, is highly anticipated for many reasons — not least of which is how terrifyingly relevant the story's sexist, misogynist world seems today. But on a more general level, I'm excited to see what the supremely talented cast will make of the book's complex female characters, like protagonist Offred's best friend, Moira. Moira (played by Samira Wiley of Orange Is the New Black) is one of the resistant characters who attempts to push back against Gilead. But what happens to Moira in The Handmaid's Tale book?

The Handmaid's Tale is all about a world where a religious, anti-women group seize control of the U.S. government, overthrow its leaders and install a theocratic authoritarian regime in its stead. I (like many other fans who are eagerly awaiting the new show) read the book in high school, where it should honestly be required reading for everyone all across the country. The book is told from Offred's limited perspective, and because she's been indoctrinated by the regime (as all Handmaids are forced to be), she could be considered an unreliable narrator — but we don't really know, because everything is filtered through her point of view.

For that reason, readers only get Offred's take on Moira, who stands out as the only person the protagonist has from her old life, before she was made a Handmaid. But in the book (much as it appears she will be in the show, based on NewNowNext's slightly spoiler-y preview of the first episodes of the season), Moira is a lesbian and feminist recruited as a Handmaid because of her fertility. Obviously, none of the Handmaids particularly enjoy being forced into sexual slavery and abuse at the behest of Gilead's new rulers, but it's particularly tough on Moira because of her sexuality. (Book spoilers ahead!)

In the book, though she resists at the start of the regime, Moira is tragically broken down in time. She is initially able to escape from the Red Center — the place where women are "trained" and indoctrinated as Handmaids — making her a symbol of hope for Offred and the other women who cling to the possibility of an escape from their forced servitude. Unfortunately, Offred later discovers that a now-submissive Moira was captured and working at Jezebel's, a prostitute among the lowly class of women "assigned" as sex workers to service the elite group of men who make up the Commanders. Not only is book-Moira now a pawn in the system, she no longer has the drive or will-power to fight back.

That's the last readers (and Offred) see or hear of Moira. So, while it's possible that she later escapes, as far as is known, she remains in her awful condition. Here's hoping that Wiley's TV version of the character suffers a less heartbreaking fate — after all, there is the possibility that the show will depart from the events of the novel, especially if the writers intend to stretch it into a multi-season series.