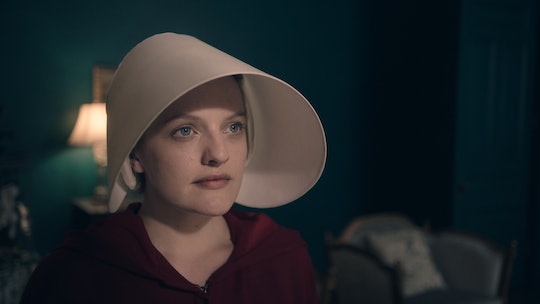 Offred's Fate In 'The Handmaid's Tale' Book Is Uncertain

Margaret Atwood's 1985 novel The Handmaid's Tale is getting a 10-episode miniseries on Hulu starring Elisabeth Moss as the story's protagonist Offred. And while some people may be tempted to think that the Hulu series is anti-Trump propaganda, the story, which is set in a dystopian future, was actually written during the years of Ronald Reagan's time in office. The trailer looks pretty true to the source material, but some viewers may still find themselves wondering: what happens to Offred in The Handmaid's Tale book? (Warning: book spoilers abound!)

In the novel, we meet Offred in her current class position as a "handmaid," which is basically a fertile woman forced to bear the children of the ruling class. But through a series of flashbacks, it's discovered that she wasn't always a handmaid, and her world didn't always function the way it does now. Offred is a member of the first generation of women living in the Republic of Gilead, which means she remembers what life was like before women were stripped of their rights.

Before it was called Gilead, the region Offred lives in was New England, still a part of the United States. But a fanatical Christian extremist group called the Sons of Jacob executed an attack which killed the President and most of Congress, after which they seized power for themselves. They suspended the Constitution under the guise of "restoring order" and used it as an excuse to enact laws which prohibited women from being employed, having bank accounts, or even reading. Women were instead organized into a caste system based on their fertility, race, religion, and health. This was said to be done in an effort to address a "plague" of sterility among the ruling class, resulting from pollution and widespread sexually transmitted disease.

As a handmaid, Offred is required to bear children for the ruling class, via a barbaric impregnation "ceremony." During an assignment working as a handmaid to a high-ranking official known as "The Commander," Offred is convinced by his wife Serena Joy to begin having more regular sex with his chauffeur to increase her chance of pregnancy. Offred begins to develop feelings for him, but doesn't trust that he's a member of the resistance against the Sons of Jacob, like he says. She worried he may be a state spy.

After their relationship is discovered, Offred is carted off by secret police, under Nick's orders. He reassures her to trust him, and the novel ends with her being thrown in a van, uncertain if she's about to escape with the resistance, or be taken to "The Colonies" — a death camp of sorts in which women are forced to do life-threatening work cleaning up radioactive waste until they succumb to radiation poisoning. Women sent to The Colonies typically die within three years.

Although Offred's fate remains unknown in the book, Atwood does write an epilogue that takes place in the year 2195, which presents Offred's story as part of an academic symposium on "The Gilead Era." The epilogue implies that the Sons of Jacob were eventually overthrown and equality was restored. But we'll find out how the Hulu series handles the ending as the TV adaptation plays out.