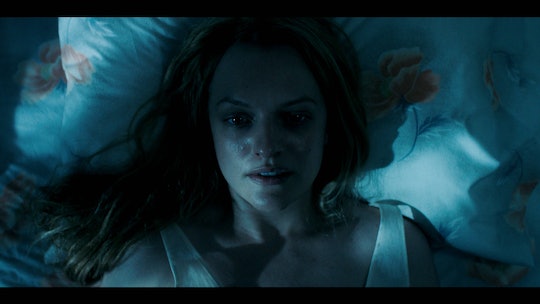 Hulu's 10-episode miniseries adaptation of Margaret Atwood's The Handmaid's Tale premieres on April 26, and the series' timing is eerily prescient. The story takes place in a dystopian near-future, where women have been stripped of their rights and forced into a caste system by Christian fundamentalists who overthrew the government. Offred, the story's protagonist, is a "handmaid," meaning a fertile woman conscripted into reproductive slavery for the largely sterile ruling class. Before the regime change, however, she was a mother herself, so viewers may be wondering: what happens to Offred's daughter in The Handmaid's Tale book?

The book opens with Offred in the middle of her life as a handmaid, and we only learn of how the totalitarian theocracy she currently finds herself in rose to power through a series of flashbacks. In them, readers learn that Offred tried to escape to Canada with her husband Luke and her daughter when the Sons of Jacob — the Christian fundamentalist group behind the takeover — first suspended the Constitution. The Sons of Jacob do this, they claim, to "restore order" after they staged an attack which killed the president and most of Congress. They take advantage of this power to strip women of their rights, outlawing employment for women, shutting down their bank accounts, and even forbidding them to read.

The Sons of Jacob reorganize their territory, now known as Gilead, into a society ruled strictly by Old Testament moral codes. As part of their new social structure, all divorces are annulled, deeming any remarriages illegitimate, and any children of remarriage bastards. Because Luke was divorced once before marrying Offred, their marriage is not recognized by the courts, Luke is still considered to be married to his first wife, and Offred is now considered an adulteress. They try to escape, but the heavily militarized regime captures them and splits up the family. Luke's fate is unknown, Offred becomes a handmaid, and their daughter gets sent to live with a loyalist family, who supports the state of Gilead.

On her third assignment as a handmaid, Offred is sent to become impregnated by a high-ranking official known as "The Commander." His wife Serena Joy is considered to be barren, although, in Gilead, law dictates that men cannot be sterile and any infertility must be the woman's fault. It's heavily implied, however, that The Commander is the sterile one. This means that Offred's monthly impregnation ritual with him will never result in a child, which could lead to her being labeled sterile and sent to "The Colonies," a death camp of sorts where women who are deemed useless to society are sent to do life-threatening work until they die, usually within three years of arriving.

Serena Joy convinces Offred to begin having sex with The Commander's chauffeur to increase her chance of pregnancy. In exchange, Serena Joy offers to slip Offred information about her daughter, whom Offred hasn't seen or heard from since their capture. The novel ends with an epilogue set in the year 2195, framing the story as an incomplete oral history recorded on cassette tapes left behind by Offred. We don't know any other details about what may have happened to her or her family. Whether the Hulu series mimics the book's uncertain ending or not, viewers will have to wait to find out.