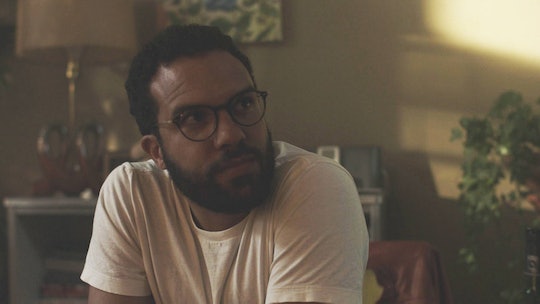 Luke's Fate In 'The Handmaid's Tale' Book Is Ominous

The Handmaid's Tale is a study in restraint. In the source material, our main character Offred (a "Handmaid" in the oppressive, sexist society of Gilead, assigned to a "Commander" and forced to bear his child) knows precious little of what's going on around her, including the true intentions of the people she interacts with on a regular basis. All she knows for sure is her own history, pre-Gilead, with her husband and daughter. But what happens to Offred's husband in The Handmaid's Tale book, after the Republic of Gilead overthrows the U.S. government and seizes power? The separation of their family is heartbreaking.

In the novel on which the new Hulu series is based, Offred often recalls her husband, Luke. He solely appears in flashbacks, existing within the scope of the book only in Offred's memories. He and Offred were married and had a daughter, named Hannah in the series. It was the second marriage for Luke, which was the entire reason that Gilead was able to justify separating them, claiming their daughter, and forcing Offred into a life as a Handmaid — divorce (and therefore second marriages) are null and void in the theocracy at the heart of the Gileadian regime.

Terrifyingly, in the novel, Gilead's takeover happens gradually — first, women en masse are fired from their jobs and stripped of their bank accounts and land holdings. It's methodical and scary, a way for the uprising to ensure that the women they mean to enslave can't escape. Unsurprisingly, as Offred recalls in her flashbacks, by the time she and her husband make their escape attempt (by heading for Canada), it's too late. They're intercepted by government agents and separated.

The last Offred sees of her husband is him getting shot as she and her daughter are separated and taken away. Though she's later told that her daughter was given to another Commander's family to be raised as their daughter, Offred never finds out whether Luke died in the escape attempt or was injured and taken elsewhere.

It's a sad ending for book-Luke, but it remains to be seen just how closely the Hulu series will follow its source material and if show-Luke will suffer the same cut-short ending. Even the show's creators have spoken of the book as the jumping-off point for the world of the series, using it as a basis for their story but expanding beyond it. "The book is so strictly from Offred’s point of view, that you hear about all of these amazing, interesting worlds and all of these parts of all of these things that are going on, but you don’t see any of them going on in the book," showrunner Bruce Miller said at a recent Tribeca Film Festival panel. "That, to me, as a TV series [showrunner], seemed like ... once you create this world, you have a lot of places to go."

On top of that, Deadline's casting announcement for O-T Fagbenle as Luke described the actor as a series regular — which suggests that he'll be featured more in the Hulu series than someone confined solely to flashbacks and memories might otherwise be. There's a strong chance viewers will get more of Luke (and maybe even their daughter Hannah) than the book gave us.