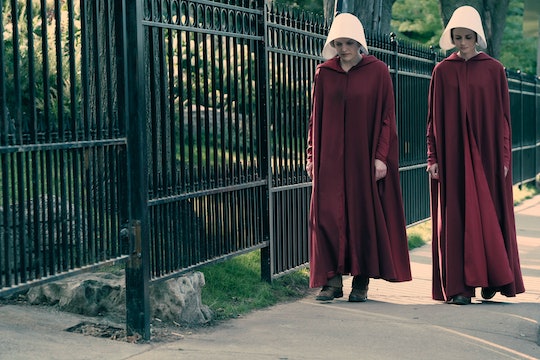 Ofglen Is An Enigma In 'The Handmaid's Tale'

Hulu's new series The Handmaid's Tale centers on a horrifying (and yet all too plausible) future, in which women are subjugated by a far rightwing fundamentalist regime that comes to power in a not-so-distant future America. It's a dark, harrowing story, filled with demoralizing scenes and sequences, but there's an undercurrent of hope — not everyone is willing to accept the new authority. Main character Offred encounters several other characters who try their hand at rebellion, including fellow Handmaid Ofglen. But what happens to Ofglen in The Handmaid's Tale book? (Warning: book spoilers ahead!)

Ofglen, played by Alexis Bledel in the Hulu adaptation, is introduced as Offred's shopping partner early on in the novel on which the show is based. Understandably, they're closed off from one another at first. A big theme in the book is the various ways in which the women react to this new world order, from the compliant or restless Wives (like Serena Joy, the wife of Offred's Commander) to the Handmaids who variously choose to either submit or fight back. At first, book-Ofglen seems like one of the former, exhibiting piety and compliance that Offred mistakes as genuine. Soon enough, though, Ofglen's true nature as a member of the resistance is revealed.

Ofglen opens up to Offred about "May Day," the resistance movement she is a part of, and even recruits Offred, asking her to gather information on the regime during her secret, illicit meetings with Commander Fred. Ofglen is arguably Offred's closest ally for the majority of the novel, and the only person she seems to trust (though, even then, the question of whether Ofglen is genuinely part of the resistance or a "double agent" is left more than a little iffy for our heroine).

Unfortunately, Ofglen's fate in the book seems to suggest that her resistance was genuine — and ended poorly. After she inadvertently outs herself as a May Day member when trying to subtly spare one of her compatriots a gruesome, torturous death by knocking him unconscious during a public execution, Offred's companion disappears. The next time Offred is scheduled to see Ofglen for their scheduled shopping trip, Ofglen doesn't show up — there's another Ofglen in her place, one who is most decidedly not a member of May Day. This new Ofglen informs Offred that the old Ofglen killed herself when she saw the government van coming to take her away, realizing she'd been found out.

Interestingly, there's no way to know for sure whether the new Ofglen is telling the truth. It's plausible that old Ofglen was captured and is being tortured for information on other subversives and that Offred is purposely being lulled into a false state of calm, thinking that Ofglen's death means she herself can't be outed.

Based on footage already released for the new show, it actually seems like the Hulu series might be going with that interpretation of events — photos and trailers clearly show Bledel's Ofglen being carted away, handcuffed and wearing a Hannibal-style mouth restraint. Definitely not having hung herself (at least not yet, anyway).

Ofglen is one of the book's more interesting characters (with a complexity Bledel herself has acknowledged in various interviews), as a woman who refuses to give in and allow herself to be used by the system. Instead, she risks her life (and likely loses it in the end) in order to help take Gilead down from the inside. I can't wait to see what Bledel makes of her probably-tragic journey.