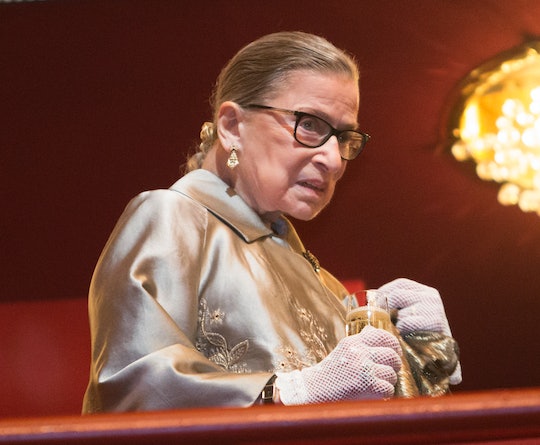 What Happens To Ruth Bader Ginsburg If Donald Trump Becomes President? It's Not Good

Don't ever get it twisted: Ruth Bader Ginsburg is a treasure on the Supreme Court and anyone who cares about civil rights for anyone should be thankful she exists. But she made some comments in the press this weekend about the presumptive Republican presidential candidate that made it necessary to start thinking about what happens to Ruth Bader Ginsburg if Donald Trump actually becomes president. They don't call her RBG for nothing — Ginsburg speaks her mind. When that comes to making decisions as a Supreme Court justice, it's awesome.

But when she was asked about her real feelings concerning the elections, she should have known better than to toss out her filter. Over the weekend, Ginsburg spoke openly about Trump to the Associated Press, The New York Times, and then later confirmed her comments with CNN.

When asked about a possible Trump presidency, the 83-year-old justice said, "I don't want to think about that possibility, but if it should be, then everything is up for grabs." In a subsequent interview with The New York Times, she repeated herself. "I can't imagine what this place would be — I can't imagine what the country would be — with Donald Trump as our president," she said. Following her statements, Trump (of course) tweeted that she should resign.

"Justice Ginsburg of the U.S. Supreme Court has embarrassed all by making very dumb political statements about me," Trump wrote. "Her mind is shot - resign!"

That's most likely not going to happen. But Ginsburg did get herself into trouble. I hate to admit that Trump might be right, but the justice should have kept her opinions to herself on this one, given her position. Here's the thing about the Supreme Court: We pretend that the justices are impartial, as they are supposed to be interpreting our Constitution, our federal laws, and that's it. Justice and fairness. We all know that the justices have biases — as we can see when they rule and dissent and make friends with legislators — but it shouldn't be so out there.

If, for example, in such a heated campaign season, the election in November is contested, like it was in 2000 between Al Gore and George W. Bush, Ginsburg would have to recuse herself. She can't rule on an election having shared her opinions on Trump's competency. Anyone with a working knowledge of (The Good Wife should know this.) Also, if he did become president, there could be a very good case to replace her.

Trump has already requested that a judge in California be recused from deciding on a lawsuit concerning Trump University because he is of Mexican descent and the candidate believes he could be biased. That's sort of complete BS, but in the worst case scenario, it wouldn't be totally out of line for Trump to suggest that Ginsburg couldn't rule fairly if there were issues he was backing.

Then again, the late Justice Antonin Scalia went duck hunting with then-Vice President Dick Cheney back in the day while cases were pending in the court — so there is also a case to be made that judges are always obviously biased and we can all stop pretending. But it does totally stink that Ginsburg's ethics would be called into play for speaking her mind (and sort of saying what everyone was already thinking).

The thing is, just like the RBG said, if Trump actually wins, everything is up for grabs. There's no telling what can happen.