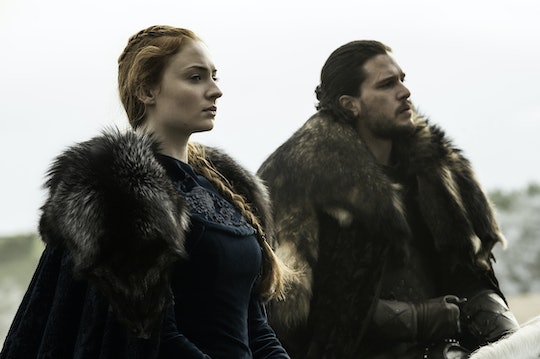 Sansa Will Fight For Power In 'GoT' Season 7

The new season of Game of Thrones is finally here and it's time to find out what's next for the families of Westeros. The Starks haven't fared well since Season 1, but last season finally saw a turn of good fortunate for the Stark family. Sansa and Jon Snow were finally reunited and they took back Winterfell, thanks to Sansa calling in the Knights of the Vale. So what happens to Sansa in Game of Thrones Season 7? She may have to fight Jon for more power.

But first, let's talk about some very good news. It looks like fans don't have to worry about Sansa's survival, at least not this season. During in an interview at the 2017 British Academy Film Awards, Sophie Turner, who plays the eldest Stark daughter, revealed she'll start filming the eighth season of GoT after she's finished working on the next X-Men film. Therefore, fans can expect that Sansa will survive Season 7 and return for the final season of the series.

However, just because she survives the season that doesn't means things go well for Sansa. Kit Harington, who plays Jon, recently revealed that the half-siblings (actually cousins) will butt heads this season. "I think Sansa twists him in a way that no one else can," he told Indiewire. "She infuriates him, she speaks up at times when it's more helpful for him for her to not speak up."

Harington also went on to say that Sansa "tests him," putting his leadership in jeopardy. "As a leader you can't have someone question you," he teased. "But when it's your sister there's not much you can do about that... She's a real challenge for him and she knows that. I think she's infuriating to him and she knows that. But she knows she's cleverer than Jon, in many ways."

It looks like this sibling rivalry could take a dark turn in Season 7, which is bad for the Starks since this is when they'll need each other the most. However, based on what Harington has said and the end of Season 6, it looks like Sansa will turn to Littlefinger for advice and guidance rather than Jon, and everyone knows Littlefinger can't be trusted.

Hopefully, Sansa knows what she's doing and finds a way to work with Jon so they can find their siblings and prepare for the upcoming war against the White Walkers.