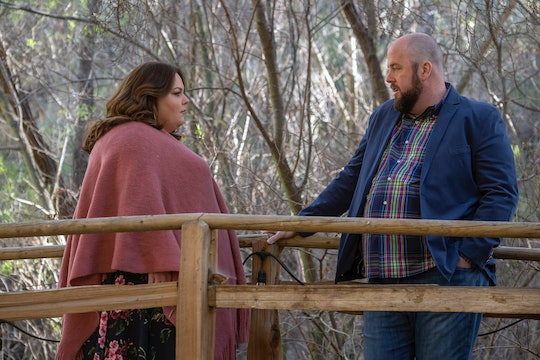 The Season 2 finale of This Is Us was, for the most part, a joyous celebration. There may have been a bump or two along the way, but Kate and Toby's wedding went off without a hitch. Everything seemed perfect until the show decided to give viewers a glimpse into the future during Randall's reception speech, and revealed Future Toby wasn't doing very well. So what happens to Toby on This Is Us?

In his toast, Randall spoke about his lifelong desire to control everything and his eventual realization that doing so was impossible, particularly because there was no way to know what life would bring you in a year or more. Then the episode cut to Toby and Kate, perhaps a year or so in the future. He was holed up in their bedroom and didn't respond when Kate mentioned that she'd spoken to his doctor, who wanted to set up a meeting to adjust Toby's medication. Toby's total silence and visible unhappiness were a far cry from the exuberant man fans had come to know over the last two seasons.

Though This Is Us didn't explicitly state what was going on with Toby, his struggle with depression has been part of his character since Season 1. It seems like he will continue to deal with that in the future.

"The Wedding" even brought up his depression during a conversation between Toby and his parents. They were worried about his relationship with Kate because they felt he catered to her every need too intensely. They'd also had fears before his wedding to his first wife Josie, and they didn't want to make the same mistake by not speaking up. Toby's mom said that he had been "severely depressed for a very long time" following the end of his first marriage. He stayed in bed all day with the curtains drawn, just like Future Toby.

This was something that had been mentioned on the show before, back in the Season 1 episode "The Pool." That was when Kate got a glimpse of Toby's seemingly perfect ex-wife and became a little too fixated on her, though Toby soon set her straight about how toxic that relationship really was. He explained that Josie had lied to him and cheated on him throughout their time together, and it took a major toll on him. After they divorced, he gained 90 pounds, had suicidal thoughts, and stopped going to work.

It looks like Toby may have another depressive episode sometime in the future, though there's no indication of how he got to that place again. There didn't seem to be anything the matter with his marriage to Kate and, though the scene they shared was short, she seemed supportive of him getting the help he needed. Clinical depression can be triggered but it doesn't always have an obvious cause to point to as a pat explanation. It's an illness, and episodes can recur regardless of what is going on in one's life. Toby can be depressed even if things between him and Kate are fine.

In an article for Psychology Today, Dr. Fredric Neuman wrote that "recurrent major depressions are triggered at intervals for no discoverable reason," though it's natural to try and attribute those feelings to something specific. Viewers don't know the circumstances surrounding Toby's depressive episode in the future, but it seems like this is something he's dealt with on and off for years. His divorce may have had an influence on his mental health in the past, but that doesn't mean the same will always be true.

This Is Us has only just begun to delve into Toby's life before Kate came into it, and this development is simply another facet of his character. Dealing with mental illness can be difficult, but Toby and Kate have already weathered quite a lot together, so there's no doubt they can handle this, too.