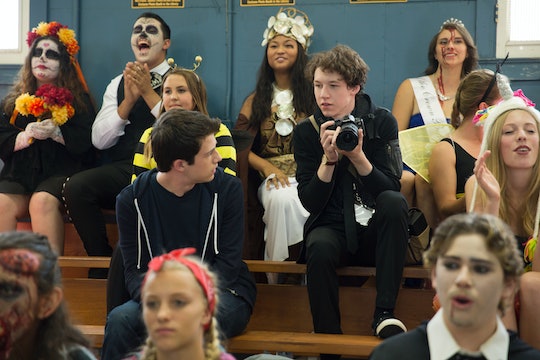 Tyler's '13 Reasons Why' Fate Differs From The Book

Netflix's latest adaptation series 13 Reasons Why is finally here and everyone seems to love it. The series follows the story of Clay Jensen as he listens to various cassette tapes his former classmate Hannah Baker left behind before she committed suicide. As Clay dives deeper and deeper into Hannah's past and depression, he discovers his classmates all have something to hide, including yearbook photographer Tyler. While the show does stick pretty close to the novel it's based on by Jay Asher, there are still a few differences. So what happens to Tyler in the 13 Reasons Why book? You get to know Tyler much more in the show than you do in the book. Warning: spoilers for the series and book ahead!

Tyler's reason for being on the tapes was the same in the novel as it is on the show. Hannah accused him of stalking her, spying on her, and taking pictures of her through her bedroom window. However, in the novel Hannah didn't actually have any proof that it was Tyler outside her window. When she and Courtney surprised the peeper, neither of them actually recognized him as Tyler. The only proof Hannah had was that he owned camera equipment and acted nervously when she asked him about the night she and Courtney caught a glimpse of the culprit.

While most readers believe Tyler was guilty, the truth is it was never actually confirmed in the book, but it is on the show. Another similarity between the book and show is that the other people on the tapes began throwing rocks at Tyler's window as per Hannah's instructions. Clay refrained from throwing a rock in both the book and the show, but in the show Clay then takes a photo of Tyler naked and sends it around school as revenge for what he did to Hannah.

In the novel, this is all the readers get to know about Tyler. Once Clay moved on from looking at Tyler's house, Tyler didn't come up again. This is much different than what occurred on the show. In the series, Tyler was seen purchasing a gun and then, when he got home, it was revealed that he had a trunk full of guns and ammunition.

In the final episode, he was seen looking at pictures of everyone else on the tapes, almost as if he was compiling a list of people he intends to target. Tyler's narrative obviously takes a darker turn on the show, but also emphasizes a very real point that the novel makes. Though Hannah made the tapes to explain her suicide, they also ended up being the cause of more bullying.

It's hard to say where Tyler's story could go from here since this is completely off-script from the book, but if the series gets picked up for a second season, things could end up taking an even darker turn.