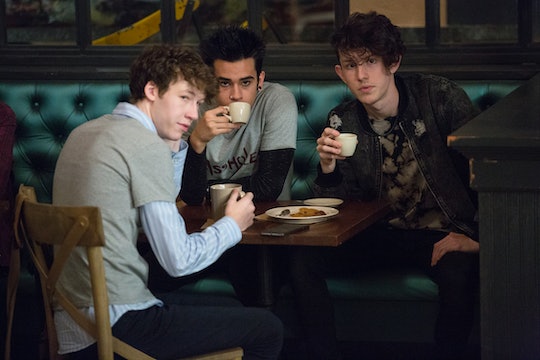 Warning: spoilers ahead for Episode 13! In the final episode of 13 Reasons Why Season 2, Tyler was pushed to his breaking point. After being brutally sexually assaulted at school, Tyler was left traumatized but felt unable to share what had happened with anyone. Instead he decided to do something drastic: he drove up to the school dance with an assault rifle, intent on doing irreversible damage to the people who had hurt him. Clay was able to prevent a shooting, but what happens to Tyler on 13 Reasons Why now?

That seems to be a question the show is leaving for a possible third season, which has yet to be announced. In the final moments of the episode, after Clay successfully talked Tyler down and took the gun from him, Tyler jumped into Tony's car and driven away. It seemed the immediate plan was to defuse the situation and get Tyler away from the school lest he get into trouble for what he was about to do. No one had any time to figure out what to do after that because the episode was about to end. It's unclear where Tony was even taking Tyler. Was Tony going to bring Tyler home? Was he bringing him to Clay's house? The finale didn't provide any answers, unfortunately.

Tyler's rage and unhappiness had been growing steadily since the first season. Constant harassment at school left him feeling isolated and powerless, a feeling he tried to assuage by shooting illegally-acquired guns in the nearby woods. His attempts at connecting to his fellow classmates always seemed to go awry and the athletes at school bothered him relentlessly. Tyler's anger eventually garnered the attention of the administration and the principal recommended that he undertake a program intended to help him manage it. And it actually seemed to help: after some time away, he returned to school in the finale much calmer.

But while Tyler may have changed, the problems at Liberty High had not. Violence was still going unchecked, especially when it was committed by someone on the football or baseball team. Tyler's horrific assault on his first day back brought him to his lowest emotionally and made him feel the most powerless he had ever felt. As had been indicated numerous times before, Tyler turned to guns when he felt a loss of control at school; the idea of him possibly perpetrating a school shooting had been speculated about since the first season because of that.

Thankfully, Clay was able to put a stop to it, but what happened to Tyler was too big a storyline to cover in the second half of a single episode. The cliffhanger was surely meant to carry on to another season if the show was renewed, which leaves much of Tyler's next step wholly undefined. The kids on this show have a habit of trying to handle things on their own without involving their parents, the authorities, or the school unless they've exhausted every other option. The fact that they tried to get Tyler away from the scene secretly instead of involving an adult could be a sign that they'll try to take care of this on their own, too.

If that's the case, they'll have to figure out what brought Tyler to a place where he thought that violence was his only option. If he decides to disclose his rape, then it could lead to the kids trying to expose Monty and his comrades like they did Bryce and perhaps finally seeing real consequences for the repeatedly cruel offenses committed by the athletes at Liberty. But one can only hope that Tyler's recovery is prioritized and that he receives the necessary counseling after what he went through. That's the most important thing.