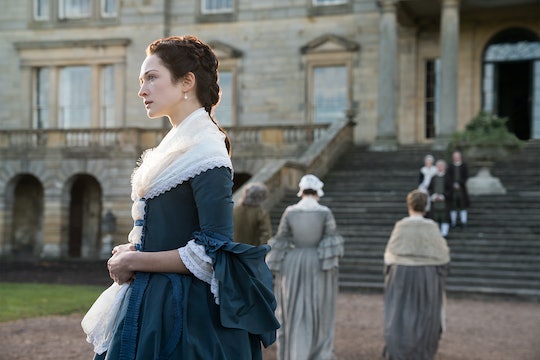 An Important Character Is Coming To 'Outlander'

With the third season of Outlander, you should get ready to start caring about characters you didn't even know existed yet, including a certain little English lord of all people. If you want to know why book fans are so excited about this next episode, you may be wondering what happens to Willie in the Outlander books? Warning: if you don't want to be spoiled, now is a good time to leave. Book spoilers abound!

If you've read any of the Outlander books, you'll have realized that Diana Gabaldon, the author of the series, likes to take her time with her characters. And if someone new shows up, however briefly, you never know when they're going to reappear, perhaps three books later, perhaps on a different continent, but they're not necessarily gone for good. And if this character has a particular emotional significance to our main characters, well then you had better believe that this character is going to show up again, even if it's not right away and even if you think their story is done. Willie is one of those characters. If you've read Voyager, you'll know that I'm not talking about the bit character from Season 1 of the show, I'm talking about Jamie's illegitimate child.

Episode 3 of the third season ended with Jamie on his way to the Helwater estate, where he is to serve as the family's groom. It's there in the books that our favorite red-haired Scottish rebel meets the Dunsany family, including one particularly headstrong young woman named Geneva, who blackmails Jamie into sleeping with her before she is forced to marry a man much older than her who disgusts her. Because who wouldn't prefer Jamie? Geneva, of course, gets pregnant from the encounter, and though she is married to Lord Ellesmere, he knows the child is not his. She dies in childbirth, Jamie shoots Lord Ellesmere to keep him from throwing the little boy out the window, and the child, named William, is happily raised by his grandparents. But that's not even the complicated part.

Because Jamie loves his son, he sticks around and bonds with him. Willie calls Jamie "Mac," and Jamie teaches him how to ride a horse. When the resemblance between them grows a little too noticeable as Willie ages (those Fraser genes are no joke), Jamie decides it's time to leave. He gives Willie a secret, Catholic baptism with a new, papist name (William James), and leaves the estate. This would appear to be the end of it. But wait! There's more!

This, unfortunately, is all the story with Jamie's son that audiences are likely to see in the third season. However, Willie does show up again in the fourth book, Drums of Autumn, and kind of in the best way. In this book, Claire and Jamie's daughter Brianna, along with her boyfriend Roger Wakefield (coincidentally the descendant of Geillis Duncan and Dougal Mackenzie) go through the stones to join Claire in the 18th century. Once they've made their way to the colonies where Claire and Jamie have started a farm, Brianna bumps into Willie, now all grown up, and being raised by his foster father, Lord John Grey. Is your mind blown, yet? I know. Mine too.

Naturally, hijinks ensue, and Willie plays an even bigger part in the story in following books. If you're wondering what Jamie's teenage son turns out like, he's exactly what you'd expect. Willie inherited all of Jamie's mannerisms, his eyes, his stubbornness, and his strong will just like Brianna did. He was also raised with Lord John's impeccable sense of honor. If Outlander lasts the span of the books (which I sincerely hope it does), audiences can get ready to fall in love with Jamie's progeny all over again.