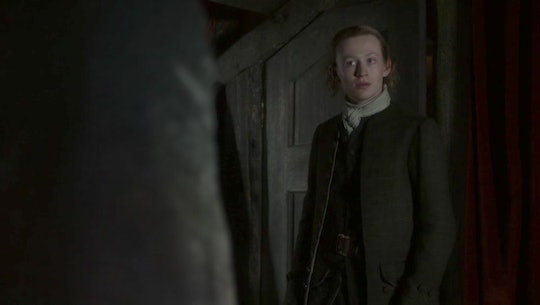 Young Ian Has An Exciting Adventure Ahead Of Him On 'Outlander'

It's pretty understandable if during the third season of Outlander you're missing everyone's favorite Mackenzie clansmen. I know I'm still missing Angus and Rupert's shenanigans. But what Season 3 does give audiences is a whole new cast of characters to fall in love with, particularly young Ian Murray, who's about to cause all kinds of trouble. So what happens to Young Ian in the Outlander books? Well, you will just have to wait and see. Unless you're OK with spoilers, in which case, read on.

So far in the series, Young Ian has shown a lot of promise as a troublemaker. While Claire causes quite a few catastrophes due to her insistence on being, well, Claire, Ian is about to outdo her on the making problems and causing loved ones considerable distress front. Original Ian (which is what I've taken to calling Young Ian's dad who has been seen in previous seasons) has already helpfully informed everyone, including Claire, that Young Ian has made something of a habit of running off. Now he's taking an active part in his uncle's illegal smuggling business, hiding seditious materials, fighting off deranged excisemen and hiding their bodies, accidentally starting fires, and having sex for goodness sake. And this is well-behaved Ian. Warning: book spoilers ahead!

But Young Ian's adventurous spirit cannot and will not be tamed. Which is how, in the books, Ian comes to be swimming for buried treasure when he is captured by pirates. No really, he is literally captured by pirates because let's be honest, that is a classic plotline that never goes out of style. In the Voyager book, Jamie has to pay Laoghaire — his now ex-wife — in exchange for her going away. The only way he can think of to get this kind of money is to find King Louis' gold.

You may remember mention of the "Frenchman's gold" from the Ardsmuir prison episode. It turns out that Jamie has had the gold the whole time, carefully hidden on a tiny island off the sea coast. In order to reach the gold, one must swim out to the island and dig it up. Young Ian volunteers for this highly dangerous task as a sort of manhood rite of passage, and Jamie allows him to do so, eventually convincing Jenny and Original Ian.

It is while he is in the process of retrieving said treasure that Ian is set upon by pirates and taken captive. Our heroes have no choice but to hop on a ship and go after him, hopefully in the same direction. You may remember hearing that some of Season 3 was filmed in South Africa. That is because Young Ian's captors are taking him to Jamaica, where Claire, Jamie, and Fergus follow him. The journey to bring back Ian is going to involve a reunion with a certain thought-to-be-dead witch named Geillis, who has turned out to be much, much creepier than you thought. She has been kidnapping young boys for her own nefarious purposes.

But this is only the beginning of Ian's adventures. Diana Gabaldon wrote eight novels in the series altogether, and Ian plays a big role in the following books. As a longtime book fan, I cannot wait to see how all of this plays out on screen, particularly because I am quite taken with John Bell, the actor who plays Young Ian.

Bell is aware that Ian is a fan-favorite character, and that he has to do him justice to keep the fans happy. "If you're playing only for the audience, you're making the thing just about you," Bell told PopSugar. "So by staying to the truthfulness [of the character], I feel like I'm doing a good job for them and I'm not too much of a disappointment." I'm looking forward to seeing everything that happens next!