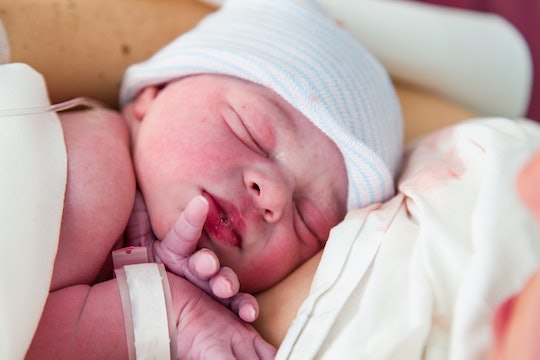 This Is How The Epidural Benefits Your Baby, According To Science

When I was pregnant with my first child, I made the mistake of sharing my plan for a natural birth with a roomful of women at my hair salon. They were all mothers and they all felt strongly about the foolishness of my idea. Why would I deliberately put myself through something painful when modern medicine offers so many alternatives? Get an epidural, they told me, and you'll thank us later. But society's focus on women's pain during childbirth means it's rare to discuss the question, what happens to your baby when you get an epidural?

I had been told by my doula that a "medication-free" birth would leave me with an endorphin high and make my baby more alert, ready to latch on and nurse. My doula also said that intervention in an otherwise healthy labor and delivery could have a "snowball effect," in which an elective epidural triggers other interventions and results in an unwanted C-section. However, anyone's birth plan would be more accurately described as a birth wish list. Stuff happens, much of it unexpected. I've heard birth stories in which labor progressed so rapidly that a woman who'd wanted an epidural didn't have time to get one. On the other hand, women who go into labor intending to abstain from pain medication may change their minds in the moment, or need to have a C-section for other reasons.

If you're wondering, I did have the natural births I hoped for with both of my kids. But I attribute that mostly to luck. I certainly don't think I'm stronger, or better, than a woman who had an epidural. Many of my friends have had varied birth experiences — an epidural or C-section with one baby, a natural delivery with the next one. In the end, the baby is the most important thing, not how they arrived.

First of all, let's take a closer look at the idea that one intervention begets another. A 2012 study found that the timing of an epidural was more important than the epidural itself in leading to a C-section. According to a presentation given at an annual meeting of The American College of Obstetricians and Gynecologists, an early epidural, meaning "administration before 4 centimeters dilation," resulted in "a 38 percent chance of C-section, compared with a 24 percent C-section rate with 'late' epidural administration when dilation reached at least 4 centimeters." This echoes the result of a 2006 Canadian study and review of previous research, which determined that having an epidural before active labor gave women an increased chance of having a C-section, as opposed to epidurals after active labor had begun, which had no effect.

However, a 2011 review of the literature on epidural timing and C-sections concluded that early epidurals did not present an increased risk for C-section. This seems to be an issue that is still controversial and also hard to prove definitively, since most researchers do not want to subject pregnant women to a randomized control trial. It's best to discuss epidurals and the risk of C-section with your doctor, since individual factors and your pregnancy and/or live birth history will also influence your chances of having a C-section.

The American Congress of Obstetricians and Gynecologists stated, however, that the following short-term side effects may result in your baby from an epidural: "change in heart rate, breathing problems, drowsiness, reduced muscle tone, and reduced breastfeeding." If you aspire to breastfeed your baby, though, it's important to note that a 2010 study found that breastfeeding could be successful after a delivery involving epidural. The authors of this study also raised an interesting point that other factors, such as maternity leave and breastfeeding support, may have contributed to a successful nursing relationship. So as with epidural and C-section, the relationship between epidural and successful breastfeeding is hard to pin down and probably involves factors and conditions particular to the mother and child. For example, my first child did not latch on right away and it took a few sessions with a lactation consultant to get breastfeeding going smoothly. My second child latched instantly and had no problems nursing.

As far as heart rate is concerned, the use of electronic fetal heart monitoring during labor will track your baby's heart rate during and between contractions to make sure everything is normal, WebMD noted. If baby's heart rate changes or becomes a cause for concern, the monitor will alert your doctor and nurses right away.

Babies are naturally sleepy after birth — this is why the first few days of a baby's life, when they sleep easily and frequently, is often called "the honeymoon." So while it's true that your baby will be exposed to any pain medication you take during labor, a 2011 study published in Biological Research for Nursing found that decreased alertness in babies born after an epidural may actually be due to the fact that they had lower levels of the stress hormone cortisol in their umbilical cords, which in turn could be because their mothers were in less pain than women laboring without pain medication.

So what are the takeaways here? Your baby may experience side effects when you get an epidural, but there is no conclusive science that shows epidurals harm babies or lead to unwanted C-sections. On the contrary, an epidural may benefit your baby just as it benefits you, by making labor and delivery less stressful. It's important to remember that childbirth is a personal and unpredictable experience. Talk to your doctor about the choices you'd like to make for your delivery, but remember that it will never entirely be in your control.