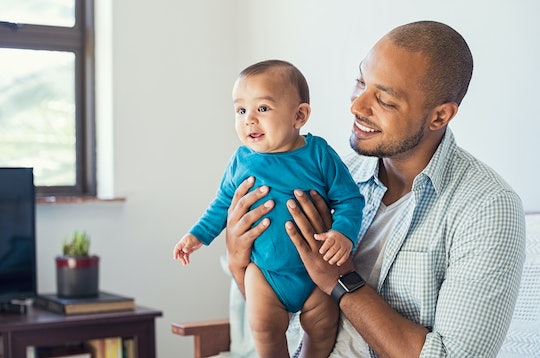 When Dad Spends More Time With Baby, It's Major For Mom, Too

Child rearing and raising has traditionally been considered the occupation of women. It's just been assumed that the men took on their traditional roles of going into the workforce and tending the needs of the wallet. However, that's not the case anymore. Not only do most houses need two incomes to survive, we are now in a position where sometimes it makes sense for the dad to stay home with the baby and the mom to reenter the workforce. But, what happens to your baby's brain when they spend more time with dad? Are babies hard-wired to respond to their mother differently?

Often, it is assumed that mothers and fathers parent very differently, and that children being reared primarily by their fathers will be at some sort of disadvantage, be it disciplinarily or emotionally. There is the idea that men are the fun parents while women do the heavy lifting of boundary setting and the exacting of some arbitrary order and standards associated with balanced parenting. Recent studies show that isn't the case. In fact, according to a report in The Los Angeles Times, when a father is the primary caregiver to their child, their brain changes, evolving to act more like that of a mother. As for the babies under their care, they respond really well to the influence of their father, attaching to them as they would to their mother if she were to be the primary caregiver.

However, according to the study, while they become more attune to the needs of the child based upon ideals that we associate with maternal influence, they still retain that goofy dad aura that is actually really beneficial for your baby. Recent research published in BMC Pediatrics noted that what happens to your baby's brain when they spend more time with dad has an awesome effect on their development, even if they're not the primary caregiver. If a baby spends more time with their dad than traditional roles would suggest, babies are healthier, happier, and some of the maternal stress is mitigated, even if the mother is still the primary caregiver. That boost to the mother's sense of peace cannot be overvalued. A happier, less-stressed caregiver, is a more effective caregiver. This isn't the mom putting on her oxygen mask first, this is the dad putting more oxygen in the room.

Another study, published in the Scandinavian Journal of Caring Sciences, showed that the babies of men who are more involved may actually be more emotionally equipped to handle stress later in life, and that their parents are happier overall, because when men are more actively involved in their children's lives, they bond more deeply to their partner and their family on the whole.

It's not an all or nothing situation. It's a number's game. While there is no determined level of involvement that a baby must experience with their dads to see the benefit of said involvement, there is this notion that babies who spend more time with their dads than what is currently popular is highly beneficial, noted a study highlighted in The Independent. They found that babies whose fathers were active participants in their daily lives, spending time with them, and just being dads, are smarter and better prepared for school and life.

I wasn't raised with a particularly active father, and I think my mother, MawMaw, and clan of women did a pretty decent job with me. But, my husband is extremely involved with our children, and it's hard not to notice a difference. However, that's anecdotal — you do you. Love your child. If your baby's dad is super involved, that's even better. At least according to the research.