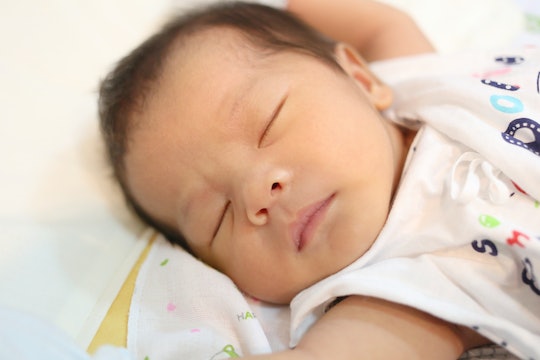 Here's What Happens To Your Baby's Brain When They Sleep

The phrase "sleep like a baby" has always been somewhat misleading, given the wailing and flailing that often accompanies nap time. But even when your baby is indeed sleeping peacefully, that powerful brain of theirs is still working overtime. When you know what happens to your baby's brain when they're sleeping, it's no wonder babies need so much rest.

Basically, the importance of infant sleep is almost impossible to overstate. As noted by GMA News Online, your baby's central nervous system is developing during sleep. Comprised of the brain, spinal cord, and optic nerves, the central nervous system is what helps you think, move, and interpret sensations, as noted by WebMD. In other words, sleeping helps your baby develop some of the most important components of the human body.

Additionally, the newborn's brain can also keep learning during sleep. According to a 2010 study in Proceedings of the National Academy of Sciences of the United States of America, sleeping newborn infants learned to predict the relationship between a certain tone and a puff of air. Once they picked up on the fact that the tone preceded the air puff, these snoozing babies learned to squint in preparation as soon as the noise sounded. This simple experiment demonstrated the dramatic ways an infant's brain can process and retain information, even when the baby is fast asleep. In fact, the full prowess of the sleeping baby's brain is probably something that will require much more study to fully understand.

In the meantime, how can you make sure your baby's sleep encourages those brain-building phases? Every kid is unique, but in general you can make a note of your baby's general sleep patterns, and try to put the baby down drowsy but not asleep, as noted by the National Sleep Foundation. It will take a little trial and error in most cases, but in time you will almost instinctively know when your little one is ready for a nap. The next time you peek in on your snoozing baby, think about all the major activity that's going on in that little head. It's pretty remarkable.