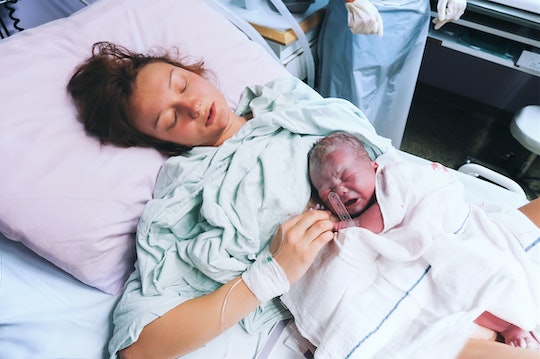 You did it! You got through 40 weeks (more or less) of pregnancy and the grueling marathon of birth to deliver your beautiful baby! But now what? Exactly what happens to your body in the first 24 hours after giving birth? While you are busy recovering and getting acquainted with your new baby, there are lots of things going on that you should physically, mentally, and emotionally prepare for prior to bringing your newborn into the world.

Dr. Michele Hakakha, M.D., FACOG, an OB/GYN in Beverly Hills, California, told The Bump that, "Most women will experience full-body shaking... the shakes occur form the immediate hormonal shifts that occur after delivery." You can also expect to still have what looks like a pregnancy bump, even after you've delivered. According to What To Expect, "During pregnancy, the uterus, abdominal muscles, and skin are stretched (and stretched and stretched) over a nine-month period, so it's no wonder it takes weeks (if not longer) for that area to shrink back after giving birth." If you've had a C-section, you can also expect to experience some weakness and swelling.

An immediately postpartum woman can also expect to lose about 10 to 13 pounds, which includes the weight of the baby, placenta, and amniotic fluid, according to What To Expect. As a new mother, however, you'll also retain an excess amount of water weight. And if you gave birth via C-section, What To Expect reported that you should expect to experience full-body swelling as the result of the IV fluids you were administered during childbirth. In other words, as a new mom you're going to be peeing and sweating a lot in the first 24 hours of parent life.

You can also expect to endure a lot of bleeding as your uterus contracts and begins to shrink back down to its pre-pregnancy size. This particular type of postpartum bleeding is called lochia, according to The Cleveland Clinic. The clinic went on to list what new mothers should expect as they start to bleed postpartum, reported in the following:

The Cleveland Clinic also reported on the following common symptoms postpartum women should expect to experience in the first 24 hours following childbirth, including breast tenderness and engorgement, pain or tenderness in the vaginal and perineum area (if you gave birth vaginally), soreness around the incision (if you gave birth vaginally), nausea (a side effect of anesthesia), constipation, and exhaustion. After all, you have just given birth.

Most women will start to feel more like themselves within hours, and certainly within a day or two, following birth. However, if your pain and discomfort increases, or you experience any of the following symptoms, the Cleveland Clinic advised you to seek medical advice immediately.

Postpartum women can also expect to endure a few uncomfortable, intense pelvic cramps. According to What To Expect, contractions last well beyond childbirth. "Once the baby arrives, your uterus starts to tighten as it returns to its pre-pregnancy size and location. That means shrinking from more than two pounds to about two ounces and making its way back down into the pelvis," reported What To Expect. These post-birth contractions are called "after pains," and they're a vital part of assisting your uterus in tightening back up.

Breast changes are another part of post-birth life. On top of experiencing breast tenderness and engorgement, as a postpartum woman you can expect to produce subtle amounts of colostrum — a thick, yellowish pre-breast milk substance — immediately after you give birth, according to What To Expect.

In other words, your body continues to change long after pregnancy ends. While even the most uncomfortable postpartum experiences (not to mention the, um, messiest) are usually normal, if you're feeling lingering pains, exhibiting any of the aforementioned symptoms, or just don't feel "right," reach out to your health care provider immediately. Yes, you're a mom with a baby to care for now, but your health will always matter, too.

More Like This
9 Reasons Why Some Women Can't Breastfeed
Does Pumped Breast Milk Have Antibodies? Experts Weigh In
Why Does My Baby Cough While Breastfeeding? Experts Explain
Banana Boat Sunscreen Has Recalled Products That Were Found To Contain Benzene