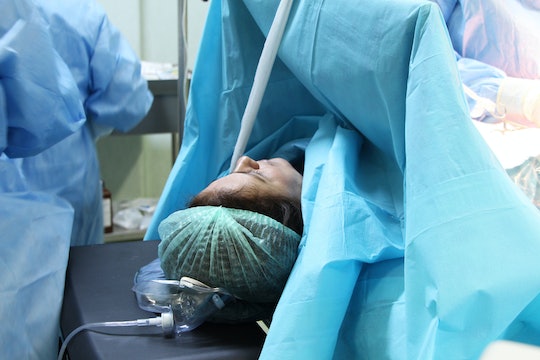 Here's How Your Brain May React To A C-Section (Hint: It's Not Simple)

Birth comes with absolutely zero predictability. It's a hard pill to swallow, but no matter how thorough your birth plan is, the act of bringing a human on to this planet is no small feat — which means a whole lot of room for uncertainty. But when birth leads to an unplanned C-section, it can cause anxiety and even feelings of failure, leading many women to wonder, what happens to your brain during a C-section? It turns out, it can have effects that range from the physical to emotional.

For starters, regional anesthesia — the kind that is used during C-sections — desensitizes a large section of someone's body by injecting drugs into the spine that block nerve signals to the brain, according to Scientific American. "Often a patient getting regional anesthesia also takes a relatively small dose of a powerful sedative drug, such as propofol — not enough to put them under but enough to alter brain activity in a way that makes the person less aware and responsive," the magazine noted.

But in addition to the body's physical response, a woman may also notice an emotional response that results from a C-section, ranging from "guilt and anxiety to trauma from feeling their life, or the life of their baby, was in danger," according to the Chicago Tribune.

"Not every woman feels troubled by her birth experience," the newspaper noted. "But having a C-section — one in three births nationally — is one reason women seek mental health help following a delivery."

The result of an emergency C-section, Dr. Sarah Allen, a Chicago psychologist and director of the Postpartum Depression Alliance of Illinois, told the Chicago Tribune, is that many women feel a loss of control, leading to long term mental effects. "They couldn't have that rite of passage that birth is supposed to be," Allen said. "Women start ruminating or questioning themselves — 'What did I do wrong? What could I have done to prevent this?'"

According to Mama Natural, it's not uncommon for women to experience feelings of blame, powerlessness, disappointment, humiliation, grief, and even like they are less of a woman because of the need to have a C-section. And Baby Center noted that you should not just expect those feelings to go away. Instead, seek support from your partner, sharing how the experience made you feel. You might even find out that they, too, have feelings about the experience.

Husbands of women who have had cesareans responded to some questions in an informal survey in a variety of ways, but mainly with fear and anger, according to Midwifery Today. "One husband said that the impact of the cesarean on his marriage was significant," the website said. “The pall that the experience placed over our entire relationship was stronger than a death in the family because we both feel that we should have been able to do better."

Consider also speaking with your midwife or healthcare provider, Baby Center noted. One of them may refer you to a counselor so you can talk things through with a professional, and assess whether or not you are suffering from postpartum depression and/or post-traumatic stress disorder (PTSD). A support group might also be helpful in helping you sort through your feelings.

Baby Center also suggested seeking out a debriefing service at the hospital where you gave birth. "Contact your maternity unit or ask your health visitor or midwife what's available locally," the website said. This service is typically available until approximately six weeks after birth, giving you time to process what's happened. "But don't worry if you don't feel ready to go over your birth experience for months, or even years," Baby Center noted. "Choose the time that's right for you."

So what happens in your brain during a C-section? A lot. But by talking to your healthcare provider, you can prepare yourselves for all the emotions and feel a little more at ease. You're a rockstar, no matter what.