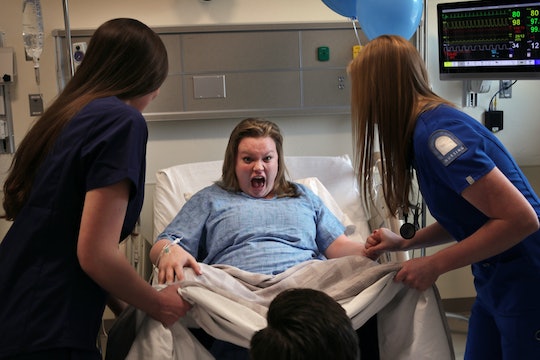 Childbirth is amazing. Not only is the act of pushing a baby out of your body into the world one of the most badass, intense things a person can do, but according to science, some pretty cool stuff happens to your brain when you're pushing during active labor. Seriously, you guys: if you weren't amazed at the human body before, prepare to have your mind sufficiently blown.

According to National Partnership for Women and Families, during childbirth your brain releases a variety hormones — including oxytocin, endorphins, adrenaline, and prolactin — that can impact your stress and pain levels, help your body push more effectively, and prepare you to physically and emotionally bond with your baby and/or breastfeed. A study publishing in the Journal of the New Zealand College of Midwives, describes this as an amazing cycle where different hormones are released and, as a result, trigger physical responses that release more hormones that trigger additional physical responses, and so on and so forth. This cycle causes your labor to progress and each hormone involved has a different purpose. For example, prolactin and oxytocin help your body push, oxytocin and betaendorphin help relieve pain, and prolactin triggers the production of breast milk.

During pushing, according to Midwifery Today, the physical act of your baby's head pressing against and stretching your cervix causes your brain to release more oxytocin, the hormone that causes contractions, which can in turn help make your pushing more efficient. According to the same site, the final surge of oxytocin that your body releases during the second stage of labor could even help your body push your baby out on it's own without any effort on your part. How cool is that?

The New Zealand College of Midwives released a study that also describes how changes in their brain can impact a laboring person's emotions and behaviors during and after birth. When pushing, laboring people often describe a "need to concentrate on ‘how’ and ‘whether’ they should push." They hypothesize that this alertness is caused by their neocortex, the part of the brain that controls senses like sight and hearing. Which makes sense from an evolutionary standpoint, when you consider that historically women may have needed to protect their babies from predators.

According to an article published by the American Psychological Association (APA), one reason your brain releases oxytocin during labor is to suppress your instinct to fight or flee. Childbirth can be a traumatic, painful, and intense experience. Our amazing brains help us get through this uniquely trying time, causing us to feel rushes of joy and love afterwards that may even enable us to weather future stressful events. That's pretty damn awesome if you ask me, because parenting is stressful AF.